Grooming and Care of War Horses in the Middle Ages

It is quite possible that since the beginning of time, no animal has had a greater or more lasting influence on the human race than the horse. From travel, to entertainment, to agriculture, to warfare, and almost anything in between, the horse has played an essential role in society and has greatly impacted the way things are done in a variety of aspects. Perhaps one of the most iconic images of horses that we have today is that of a fully armored knight riding into battle on his noble steed. The remainder of this blog will focus on how these warhorses in the medieval period were cared for. It will also depict a representation of the wardrobe of a medieval warhorse in a jousting competition which I created in conjunction with my final project. Enjoy.

The general name for the types of horses in the medieval period was Charger. They were then divided into three main sub groups: Coursers, which were the swiftest and most popular in combat, Destriers which were the largest and most widely used in jousting, and Rounceys which were typically farm and pack horses. 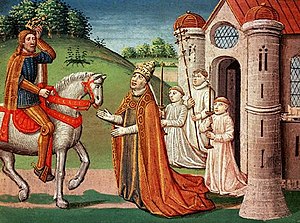 The horse’s diet was essential to it’s overall health and it’s performance in battle. Without proper nutrition, a horse would put his rider at a significant disadvantage on the battlefield and ultimately put his life in peril.

A horse’s diet would’ve consisted mostly of the following:

With all that being said, all that food has to go somewhere after it’s been consumed. An average War Horse weighing 1,500 pounds would produce 65-70 lbs of feces and 8-8.5 gallons of urine  on a daily basis. The job of caring for these essential war animals was tedious and time consuming, and required those whose task it was to do so to accomplish multiple tasks on a daily basis.( Hyland)

Bronze horseshoes with nail holes became common in Europe around the year 1,000 CE. Later on they were made of iron and were widely available by the 13th century.  The most common design was a scalloped outer rim and six to eight nail holes. Horseshoes were essential to a  warhorses health and well being because if their feet were not properly protected and taken care of then they wouldn’t be able to perform in battle which poses a major threat to the knight riding them. (Cohen)

Approximate representation of a shoe and nails used by a Destrier.

Approximate representation of a shoe and nails used by a Courser.

Each horse needed to be shod approximately once a month on average depending on how far they traveled or how many battles they fought in. The process of forging shoes and nails necessary to supply an army with approximately 2,000- 3,000 war horses would’ve required the labor of about 10 blacksmiths working for 10 hours each day. (Bachrach)

While participating in a jousting tournament, the horses were cared for by their grooms in tents.They wore caparisons, a type of ornamental cloth featuring the owner’s crest and heraldic signs. Competing horses had their heads protected by a chanfron, a leather,( and eventually iron) type of headgear used for protection from lance blows. Many times larger, “Destriers” were used for jousting.

Here we arrive at the main part of my project. What you’ll see is a representation of the uniform typically worn by horses during jousting competitions. This idea came to me because of my love for horses. I grew up around them and we currently have twelve so I was excited to have a chance to use one of my favorite horses for my final project

Here is a video of my final Project.

And here is some cool jousting footage etc. that I captured at The Excalibur in Las Vegas while there on vacation recently.

It was oftentimes referred to as barding.

In total the armor weighed about 50-70 pounds. 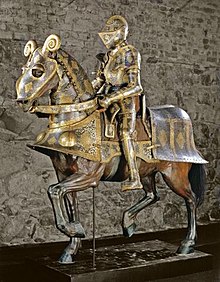