Many of the Arthurian tales are based upon the knight of the round table loyally serving their king and overcoming their moral tests. Both of these things are analogous to devout Christian behavior which was vital to the Anglo-Norman society. Having the characteristics of the strong and action-oriented Anglo-Saxon, along with being a devout and loyal Christian and subject made for the most heroic soldier. All of these characteristics can be found within the poem Sir Gawain and The Green Knight, henceforth referred to as Gawain. 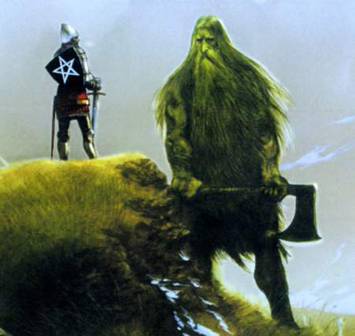 An image of Gawain facing the Green Knight (Nicholas).

Gawain’s devoutness to his king can be seen in lines 342-365 when Gawain offers to fight the knight in place of Arthur because Gawain has a lower social standing and would not be as missed if he dies (Gawain 211). Gawain knows that the only way that he can rise in social standing is to be a hero of his time and faithfully serve his king (i.e. his God) through risking his life for the betterment of his people. This act pragmatically makes Gawain a hero to the Arthurian and therefore Anglo-Norman court (Walker 123).

After taking up the quest to find the Green Knight, Gawain puts on his armor and this is when the poet offers us the definition of a great soldier which was previously stated in my last blog post. The pentangle on Gawain’s shield has many Christian connotations and meanings. In fact, the meaning behind the pentangle was so important for setting up Gawain as a hero that the poet, “interrupt[s] his narrative with a forty-three-line [] description, carefully, almost pedantically, expounding the symbolism of the pentangle” (Tracy 32). The Christian morals are further expounded on by Gawain’s moral test of remaining chaste with Bertilak’s wife (Gawain 229).

However, the Gawain poet also incorporates elements of Anglo-Saxon heroism to help the social transition into the new culture of the Anglo-Normans. The poet does this by comparing the pentangle to the more well-known Celtic knots (Tracy 33). By inviting this pagan symbol, and by having Gawain complete great feats of strength, the poet effectively combines both the Saxon and Norman definitions of heroism to create a universal hero to interweave both cultures.