It is hard to explain why someone would risk their life for the hope (not the surety) that something good will come from it. Soldiers from the beginning of time have done this very thing. One way to explain this heroism is that it evolved as human nature from some form of kin altruism. This is evident in the familial terms that have been used in warfare throughout time, “band of brothers” or “fatherland” (Smirnov et al.). This theory is also evident in the epic poem Beowulf.

The reason that this kin altruism is so evident in Beowulf is because kin was the center of society in the Anglo-Saxon time period. Familial relationships made the base for civilizations and are how the word kingdom got its origins, the familial kingdoms listed in Beowulf are shown here (Wiglaf). 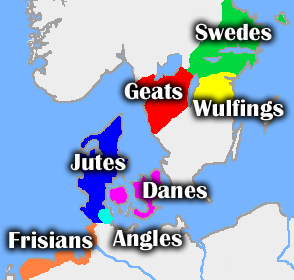 However, I would disagree that kin altruism is the main driving force for Beowulf’s heroism. Beowulf is the great warrior that he is because he was seeking to become the next king of his people. Which eventually he did achieve, “This he laid on Beowulf’s lap and then rewarded him with land as well, seven thousand hides; and a hall and a throne” (Beowulf 89). In the Anglo-Saxon society, the king was not based on blood-line, but on merit. Whoever fought the hardest and showed their worth became the next king. This is precisely why Beowulf completes his heroic feats. This reasoning behind his heroism also fits with the Anglo-Saxon definition of what a hero is that is found in the poem “The Wanderer.”

Anglo-Saxons heroes were more defined by their physical actions and mannerisms. “The Wanderer” quotes that a true hero must be “Not reluctant to fight nor too reckless, not too timid nor too glad, not too greedy, and never eager to commit until he can be sure” (lines 65-69). These are all behaviors that are meant to not offend others and thereby keep the men who adhered to them alive. We can see these same characteristics in Beowulf’s story by the way that the poet describes Beowulf just before he is awarded the kingdom, “Thus Beowulf bore himself with valor; he was formidable in battle yet behaved with honor and took no advantage” (89). By describing Beowulf in this way right before he becomes king, the poet reinforces the idea that Beowulf fit the Anglo-Saxon definition of heroism and therefore was deserving of the kingdom.

Interestingly, there are some parts of Beowulf that allude to the Anglo-Norman definition of heroism, which includes more spirituality. I will discuss more about the Anglo-Norman definition in the following blog posts. But, the Beowulf poet, who is believed to be a priest or monk who wrote down the story after hearing it performed by a schope (bard) in a meade hall, includes some elements of Christianity that are not included in the Anglo-Saxon hero definition. The Beowulf poet shows that worldly things do not last and that only spiritual strength will endure. For example, Beowulf’s sword, according to H. L. Rogers, “In other literature, a hero may do great deeds with a sword; in Beowulf the only sword with which the hero does a great deed melts away in his hand afterwards” (340). This new idea of Christianity and spirituality leads us into the Anglo-Norman idea of a good heroic soldier.