What truly defines a good hero and soldier has changed throughout time. Yet, we can track these changes and determine how a culture valued heroism through the literature that remains today. For my final project, I will be examining Anglo-Saxon and Anglo-Norman literature to find evidence of what they found to be the most important characteristics of a soldier that made him a true hero.

According to Oleg Smirnov, Holly Arrow, Douglas Kennett, and John Orbell, heroism can be defined as, “risking one’s life fighting for the group” (927). This definition is very broad and can be used to describe every soldier who goes into battle. If every soldier is a hero, then why do some soldiers rise above the others in tales and legends passed down from generation to generation? What is the definition of that kind of hero? According to the Anglo-Saxons, it is someone who will let their actions speak louder than their words.

We can see this definition of heroism by examining the poem, “The Wanderer.” 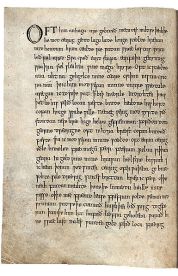 The definition given here can be directly attributed to what makes a good soldier because the poem was originally used as a rallying device to get soldiers ready to go into battle. This poem has been preserved in the Exeter Book, the largest surviving container of Anglo-Saxon poetry, which dates back to 975. A picture of the poem from this book is given to the right (Muir). Although the book dates back to 975, the poem of “The Wanderer” may be much older (Greenblatt 119). According to this poem, a true hero has these characteristics,

A wise man must be patient,

not too hot of heart     nor hasty of speech,

not reluctant to fight   nor too reckless,

Muir, Bernard. “Facsimile of the first page of the Wanderer in Old English from the codex of the Exeter Book.” The Exeter Anthology of Old English Poems, 2006.