Joan of Arc and Her Mission

Joan of Arc and Her Mission

Joan of Arc (d’Arc) was born to Jacques d’Arc and Isabelle Romee in 1412 in Domremy, an Armagnac town in France. Her family, along with the rest of the country, was Catholic, and her mother was determined to raise Joan to be devout. Isabelle once described her daughter as pious and said that “Because the people suffered so much, she had a great compassion for them in her heart and despite her youth she would fast and pray for them with great devotion and fervor.”

France, before, during, and after Joan of Arc’s time was caught up in the Hundred Years’ War between the English, the French, and the Burgundians, a Vandal group that allied with the English forces. When Joan was eight years old, French King Charles VI and his wife Isabeau made a treaty with the English King, Henry V, that their daughter, Princess Catherine, would marry Henry V and he and his future son would rule France once King Charles VI died (instead of their son Charles VII). King Henry V died before King Charles VI, and Henry’s son was only an infant. Charles VII couldn’t fully claim the throne because of the Treaty of Troyes, so he and Henry VI were both named king. The prophecy had started to come true: a woman had lost France, and now a maiden had to save it.

In 1425 at thirteen years old, Joan started to hear voices and receive revelations from God. She associated the voices with the Archangel Michael and Saints Margaret and Catherine. The Archangel Michael originally told her to behave well and go to church (perhaps so she’d be prepared and pure for more heavenly visitations). Eventually her voices told her that she needed to help the dauphin (prince) Charles become king of France and unite the land. She felt overwhelmed being so young and untrained in any battle techniques, but she knew what she had to do to please her God.

Her first step was to journey to Vaucouleurs, another Armagnac town, to visit Robert de Baudricourt who could send her to see the dauphin. She, being a woman, had to assemble an entourage to travel to Vaucouleurs, without the help of her father. When she got there, de Baudricourt was not convinced by her story and sent her away. But Joan was persistent. Within the year, she won his support (perhaps because her influence carried more weight at this time), and he sent her to Chinon to see the prince. She was given a horse and men’s clothes to wear including a tunic, doublet, and hose and breeches. With her hair cut short, she was quite a sight in Chinon. 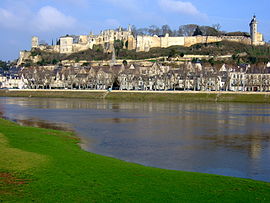 The Chateau de Chinon, and the Vienne River (Wikipedia Contributors)

The royal court was wary of Joan, since the people couldn’t know beforehand if she were from God or Satan. If she were Satan’s messenger or a false prophet and Prince Charles sent her to war on France’s behalf, it would lead to disaster and ruin his reputation. However, the court was also inspired and hopeful that she could finally put the rightful heir on the throne. It would’ve been equally damning to not listen to a true prophet of God who could finally put an end to their misery.

To assess Joan’s integrity, two ladies of the court were ordered to examine Joan’s physical body. If they found her a virgin, which they did, it would be a sign that she was pure and undefiled by the devil. Next, her spiritual integrity was put to the test. She was interrogated about her faith and habits. Several more inquiries by clerics and theologians in Poitiers were required before any other course of action were decided; however, the theologians agreed to test her by sending her to the besieged Orleans to test her claims. If her attack were successful, it would provide strong evidence that she had spoken right. If she failed, the French would have nothing to lose: Orleans would still be under siege (as it currently was) and it would look well on the clerics for having tested her.

Joan began to be perceived differently at this point. She was called the Maid, and she began to own that persona herself. When she had a wider audience listening to her message, she claimed the title without hesitation. She was sent back to the dauphin in Chinon (whom she had to find amongst others who claimed to be king) and then on to Orleans, Saint Catherine’s sword in hand.