The Bayeux Tapestry is an embroidered work what follows William the Conqueror’s conquest of England in 1066 AD. William used the Norman army to invade England in order to regain the English throne from Harold. Harold had taken the throne after the former king of England, Edward the Confessor, had died without an heir.

Movement of the English (blue) and Norman (red) armies during the conquest.  https://mondes-normands.caen.fr/angleterre/histoires/4/zooms/map4-5-william.htm

The piece is nearly 70 meters long and consists of nine conjoined strips of linen that have been embroidered with only 10 colors of thread. It may have been longer, but it is speculated that the final scenes have been lost. It was likely commissioned by Bishop Odo, William’s half-brother. The tapestry has a more Anglo-Saxon style of stitching than French, and was probably not made in Bayeux at all. This is supported by Old English characters in the writing on the tapestry (Lewis). The validity of the tapestry as a source for the events of William’s conquest is questionable. Embroidery is not the clearest art form and can be easily misconstrued, the text that appears on the tapestry is limited and often abbreviated. The tapestry also focuses mainly on events in England, leaving out many details of events that took place elsewhere (Lewis). 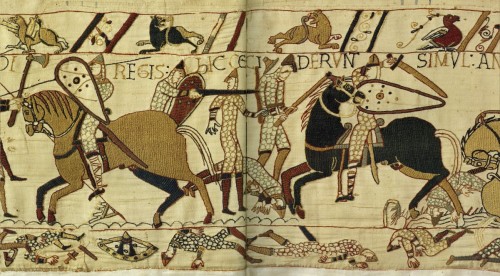 This panel depicts a violent battle including many dead and broken weapons. It was uncommon to depict the dead in a piece like this. The latin text over this scene reads, “Regis: hic ceciderunt simul Angli et Franci in prelio”, which translates to “Here fell the English and French simultaneously in battle”. This battle scene likely represents what is known as the Malfosse incident (Wilson). The Malfosse incident was a disastrous charge by the Normans through English lines into a trap where many soldiers and horses were killed.  The English were positioned on a hill and faked retreat, tricking the Norman cavalry into charging their horses into concealed spikes (Wilson).

There is debate as to whether the animals depicted in the borders of the tapestry are directly related to the scenes that occur above or below them. Figures in the top border of panel 65 include lions and griffins, these may just be there to take up space or they could represent something symbolic about the scene. The bird that appears in the top border of section 65 is a dove carrying an olive branch, this is often used as an expression of peace (Owen-Crocker), this seems to be quite unrelated to the bloody battle that occurs below it.