Casus belli: Duke William has been betrayed by King Harold, and must now seize his “rightful” throne

This scene from the Bayeux Tapestry shows William’s men sailing across the English channel and arriving on the shores of Pevensey Bay. The arrival took place on September 28. Normally, local watchmen would be keeping watch over the seas, detecting invaders, if any. Fortunately for the Normans, however, was that members of the “fyrd,” (farmers by trade, though part of Harold’s militia) had abandoned their posts to tend to their harvests, as it was September. Thus, William and his men were able to land relatively easily. Though not spotted by watchmen, the men did not arrive entirely undetected: local landowners witnessed the arrival and their reports reached Harold three days later (Rud 67-68).

The ships on the left of the image are shown traveling across the channel. Evident by the straining sails in the artwork, the wind was at the backs of the Normans. Though perhaps not as glorious as the tapestry depicts, there was almost certainly strong wind on the waters. The English channel is notoriously unpredictable between states of strong wind and silent calm. These same winds also chased away King Harold’s navy from the location. Where the Normans should have met resistance from the navy, they found empty waters, as Harold’s ships were being repaired of damages sustained in tumultuous waters (Rud 66-67).

The ships on the right of the image are used to depict the actual landing of the Normans. The main boat is in the process of being received on the shore: men are lowering the masts and the onboard horses are leaping into the shallow water. The boats furthest right have been emptied and lay decommissioned on the shore (Rud 67). In the entry for the year 1066 in the Anglo-Saxon Chronicle, it reads:

Then came William duke of Normandy into Pevensey… This was then made known to King Harold, and he then gathered a great force, and came to meet him at the estuary of Appledore; and William came against him unawares before his people were assembled. But the king nevertheless strenuously fought against him with those men who would follow him; and there was great slaughter made on either hand. There was slain King Harold and Leofwine the earl… and the Frenchman had possession of the place of carnage, all as God granted them for the people’s sins. (Anglo-Saxon Chronicle D – Worcester)

While this entry describes scenes not included in my panel, it confirms that Duke William was able to land in England with some element of surprise. Had the previously mentioned fyrds been attentive to their posts, perhaps William’s arrival would have been met with resistance and therefore changed the course of the invasion. 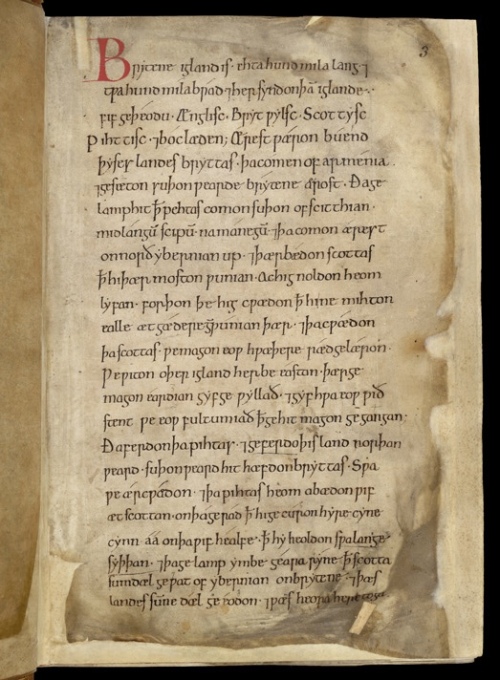 When using this artwork as a historic source, it is important to take into account the perspective of the creators. Even without knowing who embroidered the linen, one could tell that it tells a story of William gloriously conquering his rightful throne and removing the dishonorable Harold. That alone would reveal bias for William’s actions. The nature of the embroidery itself invites multiple interpretations of the scenes depicted. In fact, the Latin text here and there on the artwork are the only forms of narrative offered (Milbrandt, Bonds 26).

Rud, Mogens. The Bayeux Tapestry and the Battle of Hastings 1066. Christian Ejlers, 2002.