Cleopatra, Who Was She?

In a way, Cleopatra VII was born into mystery–her mother is an unknown woman with a background still highly debated by scholars. Was she white/Greek? Was she black/Egyptian? Was she royal? Well, since she is classified as a princess, it is safe to assume her mother was royal. Other than that, it is hard to make any clear conclusions on her ethnicity (Tyldesley 29-33). This is mostly due to Octavian ordering most of the statues and portraits of Cleopatra to be destroyed after her death (Tyldesley 58).

Historians believe Cleopatra was a well-liked ruler. She presented herself as a god, much like the rest of her family. She was also the first Ptolemy ruler to learn Egyptian, and she also knew many other languages (Plutarch, Life of Antony, 27:3). Embracing Egyptian culture more so than her ancestors, she had Egyptian-esque artwork of her completed. Cleopatra was a capable, cunning leader who desired to maintain Egypt’s independence and increase its power (Crawford).

The Cleopatras portrayed by Hollywood actors are incredibly beautiful women, but was the authentic Cleopatra as stunning? It is worth noting that Cleopatra came from a long-line of incest. Genetically, incest is sabotage. The Ptolemy family was noted to have buggy eyes and swollen necks. These traits are seen in sculptures and coins from the Ptolemaic Dynasty (“Ptolemaic Dynasty”). Coins of Cleopatra feature a large nose, pointy chin, and fat neck (Tyldesley 54). Perhaps, one of the best descriptions we have of Cleopatra is recorded by Plutarch in the Life of Antony:

“For her beauty, as we are told, was in itself not altogether incomparable, nor such as to strike those who saw her; but converse with her had an irresistible charm, and her presence, combined with the persuasiveness of her discourse and the character which was somehow diffused about her behaviour towards others, had something stimulating about it. There was sweetness also in the tones of her voice; and her tongue, like an instrument of many strings, she could readily turn to whatever language she pleased” (27:2-3).

She may have been “average looking” to the common Roman or Greek, but there was something uniquely beautiful about her. Maybe she was humorous, optimistic, intelligent, and adventurous. Also, it did help she had the fortune to deck herself out in the finest clothes and jewels. What can be agreed upon, however, is that it is no small feat for a woman to woo two powerful Roman men in order to progress her own reign; first Julius Caesar and then Mark Antony. It is important to note that Cleopatra did not necessarily need these men in order for her to rule, except for the slight involvement of Caesar. Who are these men and how did she win them over?

Born in 100 BC, some may say Gaius Julius Caesar was born to lead. He was a political leader as a quaestor, aedile, praetor, consul, and dictator. He was a fine military leader, and defended Rome from nations who threatened it. When Cleopatra first met him he had just defeated his enemy, Pompey, and would go on to secure his position as Rome’s dictator (“Julius Caesar”).  An ancient Roman historian, Suetonius, details Caesar’s physical appearance: “Tall of stature with a fair complex, shapely limbs, a somewhat full face, and keen black eyes” and notes that he was balding, and would comb over his hair to cover his baldness; his bald head was the topic of many jokes (45:1-2). 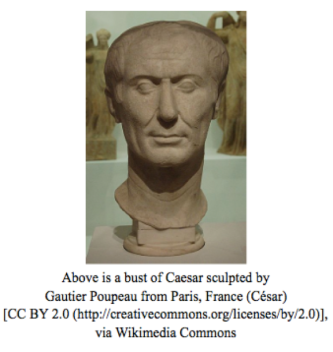 When he first met the twenty-one year old Cleopatra, he was fifty-two (“Cleopatra”). Cleopatra had so bravely come to him wrapped up in a bed sack, being snuck past guards to meet with him. Julius Caesar, being a man of courage himself, was impressed by her fearlessness (Plutarch, Life of Caesar, 49:3-10). It may be safe to assume that Caesar was sympathetic to Cleopatra’s requests to have her throne returned to her. After all, he desired to rule and lead much like Cleopatra did. What did she do to convince him to give her the throne of Egypt back and why did he have sexual intercourse with her? What is known is Caesar had affairs with many royal women during his life. Nonetheless, none of these affairs proved as potent and tantalizing as the one he had with Cleopatra. He would spend hours with her in Alexandria. When he returned to Rome, he would send for her to stay there. He proceeded to spoil her with gifts. It can also be said that Rome needed a strong Egyptian nation for the resources supplied by it, so perhaps her good fortune was also fueled by Caesar’s own political agenda (Tyldesley 57).

Whatever Cleopatra did to make him fall in love with her, it was sure powerful. However, this love between them was not a strong enough catalyst for him to break Roman tradition and name Caesarion, the child he illegitimately fathered with Cleopatra and his only known son, his heir (Suetonius 52:1).

In 83 BC Mark Antony was born. He was a relative of Julius Caesar (Caesar was his mother’s cousin). Although he was an excellent military leader, he was known as a semi-irresponsible, fun-loving man. This drove a wedge between him and other Roman leaders, but it nourished relationships with the soldiers beneath him. Caesar had asked for Antony’s assistance in his conquest of Gaul and later put Antony in political leadership, albeit he was not an adequate politician; nonetheless, Antony was “fiercely” loyal to Caesar. That is probably why, when Caesar was murdered, Antony used his eulogy to speak poorly of the assassins. After a couple of the assassins, Brutus and Cassius, were defeated by the Second Triumvirate, and control of Rome was split between Mark Antony and Octavian, Antony, now around 42 years old, requested Cleopatra come to him in 41 BC to discuss her involvement in the war. He wanted to fine her for supposedly supporting the opposition, but perhaps he merely wanted someone to financially refresh his army (Mark). 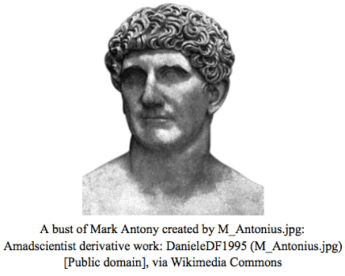 Cleopatra, being much too clever, came to the Mark Antony decorated as a goddess; specifically Aphrodite, the goddess of love. Plutarch records in his histories that she came up the Cydnus river in a beautiful boat with violet sails. Ethereal music from harps and wind instruments were playing as it rowed towards Antony. Cleopatra was clothed in wonderful fabrics, lounging about “under a canopy of cloth of gold,” with her servants decorated in luxury (Plutarch, Life of Antony, 26:1-3). Needless to say, Mark Antony was smitten and did not issue Cleopatra a fine. In fact, he granted her much of her wishes, and attempted to live carefree with her. It is said he “joined Cleopatra and the Egyptians in general in their life of luxurious ease until he was entirely demoralized” (Tyldesley 150).

The next and final blog post in the series: “Cleopatra: the Battle of Actium and Her Own Death”