Cleopatra: A Biased Stance in the Roman Civil War

The Great Roman Civil War, or Julius Caesar’s Civil War, had various causes. One major catalyst was the conflict that developed between Julius Caesar and Pompey. At one point they were allies, being two of the powerful leaders involved in the First Triumvirate, the third being Marcus Licinius Crassus. This alliance was formed in 60 BC in response to a shaky Roman nation in an effort to keep it from falling apart. They banded together for seven years to control Rome (Wasson).

Putting three powerful men together and making them work towards a common goal was sufficiently challenging, but when Crassus died at the Battle of Carrhae in 53 BC, the Triumvirate started to disintegrate. Not only that, but Caesar had married his only daughter to Pompey as an act of friendship, and she died during childbirth the year prior to Crassus’ death (Wasson).

The Roman senate preferred Pompey’s leadership to Caesar, but Caesar desired power. The senate had already placed Pompey in consulship when Caesar returned to Rome from an excavation. Upon Caesar’s return, a conflict broke out that led to a civil war. One of the most significant battles was the Battle of  Pharsalus in 48 BC, where Julius Caesar defeated Pompey and Pompey escaped to Egypt (Wasson). Pompey did not realize he was running into a trap; it was in Egypt where Pompey died under the orders of Ptolemy XIII. With the death of Pompey, there was not much standing in the way of Caesar claiming the power he wanted. In 44 BC, he was declared dictator of Rome for life (Andrews).

The Roman Civil War Between Antony and Octavian

Caesar’s claim to dictatorship was cut short by his assassination planned out by a gang of Roman senators who never wanted Caesar in leadership. Julius Caesar did on the “Ides of March” (Andrews). 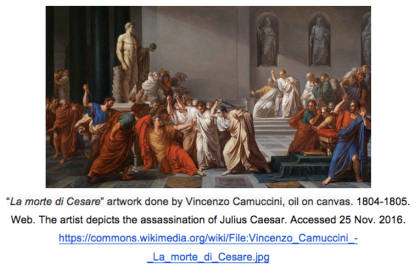 Now Rome was without a solid leader. Another Triumvirate, the Second Triumvirate, was formed to rule Rome, composed of Mark Antony, Octavian, and Marcus Lepidus. It was these three men who defeated Caesar’s assassins, specifically Brutus and Cassius, at the Battle of Philippi in 42 BC, and it was Mark Antony and Octavian who had full control of Rome by 36 BC after Octavian expelled Marcus Lepidus out of the Triumvirate under suspicion of rebellion (“Cleopatra” 2009).

Once again, two powerful men were attempting to share control, and, predictably, the tension began to rise. Another outbreak of war occurred, this time between Antony and Octavian. In addition, the Egyptian queen Cleopatra was a definite catalyst for this conflict (“Mark Antony”).

Cleopatra’s involvement began with the conflict between the Second Triumvirate and Caesar’s assassins. The Second Triumvirate had requested assistance from Egypt, and Cleopatra sent over four legions Caesar had left behind in Egypt. After the Brutus and Cassius were defeated and control of Rome was split between Mark Antony and Octavian, Antony requested Cleopatra come to him in 41 BC to discuss her involvement in the war (“Cleopatra” 2016); this is when their affair began. It was said Cleopatra arrived on the most beautiful ship in the most flattering clothes and won over the favor of Mark Antony (Plutarch 26:1-4). They eventually had three children together and Mark Antony married her according to Egyptian custom (“Cleopatra” 2016).

Mark Antony’s relationship with Cleopatra was his downfall for multiple reasons. For one, Antony was in a politically-driven marriage to Octavian’s sister, Octavia, at the time of his indulgence in Cleopatra. Also, Rome did not honor marriages to foreigners (“Mark Antony”). In addition, Antony had desired military support from Cleopatra and turned away aid received from Octavian. However, the most troubling perhaps was when Mark Antony declared Caesarion as Julius Caesar’s rightful heir and gave Caesarian and his mother more land in 34 BC (“Cleopatra” 2009).

According to Suetonius, Mark Antony wrote a letter to Octavian saying the following:

“What has come over you? Do you object to me sleeping with Cleopatra? But we are married; and it is not even as if this is anything new…What about you? Are you faithful to Drusilla? My congratulations if, when this letter arrives, you have not been to bed with Tertulia, or Terentilla, or Rufilla, or Salvia Titisenia–or all of them. Does it really matter so much where, or with whom, you perform sexual acts?” (Tyldesley 169).

Octavian, indignant and frustrated, accused Mark Antony of tarnishing the name of Rome. Just two years later, the Roman senate revoked Antony’s political positions, and Octavian went to war with the woman who had Antony wrapped around her little finger–Cleopatra (“Cleopatra” 2009). The end of this war will be discussed in the final blog post, “Cleopatra: the Battle of Actium and Her Own Death.”

Next blog post in the series: “Cleopatra: Cleopatra, Caesar, and Antony”