This is a photograph of a work of art from the 12th century which shows a traction trebuchet. You can see the men pulling down on ropes to give flight to the projectile (Peter of Eboli).

China introduced us to the first sling based throwing machines in the 4th and  5th centuries (Chevedden, Eigenbrod, Foley, and Soedel, l). They were powered by men pulling on ropes that were connected to the end of a swinging arm. Later in the 7th century these man powered machines, manganikon, were developed in the Byzantine Empire. The Arabic empires then adapted the machines calling them manjaniq and were the most accurate and reliable. The Frankish Empire also used these first sling based throwing machines, finding a balance between reliability, accuracy, and cost (Nossov, 163-164). 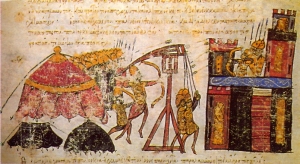 This is an image of a traction trebuchet contained in a manuscript depicting a Byzantine siege of a citadel. The image is from the 11th century and the author is unknown. It is interesting to note the archer who would attempt to defend the pullers ("Unknown").

In the 8th century, a hybrid counterweight-man powered stone thrower was born, offering more power and accuracy. It easily hurled a 50 kilogram projectile through the air. Innovation of the stone thrower throughout four centuries produced a new throwing machine that used the force of gravity rather than pulling on ropes and by late 12th century the European trebuchet was developed (Nossov 171).

The Concept and Design of Hinged Counterweight Trebuchets.

The development of a trebuchet was an evolutionary process consisting of many engineering innovations throughout centuries of observation and design. Constructing a trebuchet consisted of a “supporting framework with vertical posts joined by an axle.” A beam is un-proportionately positioned through an axle. At the longer end of the beam a sling made of leather or netting was fixed with rope to the beam and then doubled-backed and attached to a metal pin or hook. On the shorter end ropes in the case of a traction trebuchet or an immense counterweight was attached to deliver the necessary conversion from force to mechanical energy (Nossov, 171). 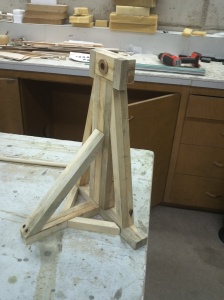 One of two vertical supports that will be attached to a base and joined together by and axle.

The two vertical supports (framework) of the trebuchet. The beam is also shown here which will have the axle go through it. 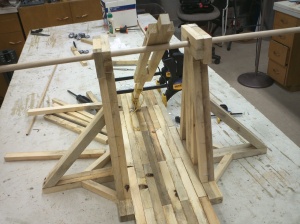 The two vertical post are connected to a base to complete the framework for the trebuchet. The hole for the axle has been drilled in the posts but not in the beam. The counterweight box, sling and channel still need to be completed.

Medieval engineers in the 13th century found that counterweights that were hinged could throw projectiles farther as, they were able to harness more energy than their other counterweight counterparts (Nossov, 174). Additionally the hinge proved to be a great braking system for the trebuchet allowing it to nearly completely stop as the beam rotates to an upright vertical position. The breaking system induced by the hinged counterweight decreased the amount of strain inflicted on the structural framework and cushioned the violent reaction that would cause the trebuchet to go off target upon the next firing (Chevedden, Eigenbrod, Foley, and Soedel, 3). As a result “The much gentler release of the trebuchet meant that engineers did not have to reposition the frame between shots and so could shoot more rapidly and accurately” (Chevedden, Eigenbrod, Foley, and Soedel , 3). Other advantages were that hinged or moveable counterweight trebuchets were easier to “transfer and assemble” (Nossov, 174).

Sling pouch made of leather cut into a diamond like shape. Two triangle pieces of the leather were cut out and stitched together to create a pocket rather than a flap. Grommets were attached to each end of the leather and tied to the rope to complete the sling. 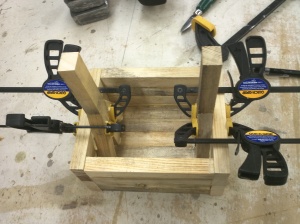 Completed the counterweight box and hinge. The axle will be put through the short end of the beam. This will allow for more energy to be transferred to the sling and ultimately the projectile.

In order to load the trebuchet the long end of the beam was pulled down to the ground by a series of ropes, windlass, and or squirrel’s wheels. A large trebuchet was cocked by 10 to 12 men who could lift a 10-ton counterweight in approximately 6 minutes. When the long end of the beam was lowered into position the trigger was fixed and the sling was prepared (Nossov, 177). The sling entered a special channel which directed the sling and various projectiles: stone or lead balls, pots of flammable substances, cobble-stone grenades, burning sand/tar, darts, diseased corpses, or beehives were loaded inside the sling (“Trebuchets”).

A shot was fired in the following way…the operator released the trigger mechanism and the counterweight sped downwards, propelled by the force of gravity. The longer end of the beam soared upwards respectively. The sling would tear itself off the chute in which it lay, outstripping the lifting of the beam, and would lash around the end of the beam, adding acceleration to the projectile. Depending on the construction of the sling, its end either slid off the cog on the beam or was pulled by a tie; the sling would unfold and release the projectile (Nossov, 174).

Trigger construction and application was diverse. Triggers found in ancient drawings of trebuchets do not always reflect the method of firing a trebuchet. Due to the proximity of the trigger in conjunction with the beam, it has been suggested that the soldier who’s duty to pull the trigger may have been just as dangerous as the soldier on the frontline. A common trigger was a rope-over beam method. The rope then needed to be expelled by a mallet, pin or snap (“Trebuchet Triggers”).

Melted lead into six bricks that weight approx. 1.5 pounds each.

Completed lead bricks to act as counterweight for the trebuchet. Don't touch they are still hot!

Attaching the channel which will guide the sling and keep the projectile on target. Also, in the background you can see my first attempt at the beam. The holes for the axle were not drilled straight.

When laying siege to a wall or castle stone or lead balls of the same caliber (weight and size) were used. This allowed consistent and accurate shots. The complete trebuchet mechanical system is truly a dynamic one. The velocity, distance, and trajectory are not only dependant on the ratio of projectile weight to counterweight but also the sling length, cog length and angles, and beam length and angles and counterweight motion.  Firing a projectile in a short sling versus a long sling resulted in a steeper or grazing trajectory respectively. However these trajectories were also determined by the size and weight of the projectiles and counterweight (Nossov, 177).

Locked and loaded. Bird-eye view of the completed trebuchet. The trigger is a metal rod connected to a pullrope. The box is loaded to the brim with lead bricks. The ropes and pulleys are connected to the framework and beam to lower the beam after it has been fired. The only thing which wasn't done on this trebuchet was the construction of a windlass.

Impacts of the Trebuchet….

The trebuchet expanded and impacted Islamic, Mongol and European conquest. It was a weapon which held both offensive and defensive operations and was an instrument which helped propelled the “Black Death” epidemic across ancient Europe – as diseased corpses were hurled into cities (Chevedden, Eigenbrod, Foley, and Soedel, 2).Further it seems to have had an impact on theories of motion and the development of clocks and pendelums.

“During their heyday, trebuchets received much attention from engineers indeed; the very word ‘engineering’ is intimately related to them. In Latin and the European venaculars, a common term for trebuchet was ‘engine’ (from ingenium, ‘an ingenious contrivance’), and those who designed, made and used them were called ingeniators” (Chevedden, Eigenbrod, Foley, and Soedel, 3).

The trebuchet was a multifaceted feat that furthered science, engineering, technology, as well as politics and war. It impacted four civilizations of which “its fullest development [was achieved] in Western Europe” (Chevedden, 71-72).  Today it’s role helps students understand not only historical achievements but also physical principles that were discovered centuries ago. It has been well enjoyed by historians, layman, hobbyists and enthusiasts. As for myself, I have enjoyed learning what made the trebuchet a “Great Idea of the West.”

Side view of the completed trebuchet. Not bad considering It started with just a pile of sticks and some random hardware.