The Battle of Badon has significance because the encroachment of the Anglo-Saxons on the Celtic Britons was halted as a result of it. This decisive victory was accomplished by a united force of Britons, which implies that they had some sort of leadership, at least militaristically; their military leadership was purported by later sources to be Arthur, though he was clearly not “King” Arthur at this time, as Gildas refers to Ambrosius Aurelianus (see right) as the organizer of this force. (Korrel).

The earliest mention of King Arthur can be found in the 594 poem “Y Gododdin” by Aneirin. Still, this is only a reference and certainly provides no concrete evidence for a real King Arthur. The stanza in which Arthur is referenced reads:

He fed black ravens on the rampart of a fortress

Though he was no Arthur

Among the powerful ones in battle

In the front rank, Gwawrddur was a palisade (Wikipedia)

One remarkable, though quickly refuted, artifact is the Artognou stone, discovered in 1998 at Cornwall, United Kingdom. The inscriptions on the stone read, as translated by the Celtic Inscribed Stones Project,  “Artognou descendant of Patern[us] Colus made (this). Colus made (this).” (Wikipedia). Because “Artognou” bears semblance to “Arthur,” many parties, including the media, mistakenly referred to the artifact as the “Arthur stone.” Additionally, the stone was dated back to the approximate time period in which Arthur is reputed to have lived, if he did. Despite these commonalities, scholars have rejected the notion that the stone is related to the historic King Arthur in any way. Perhaps one of the contributing factors to this rejection is the fact that the stone does not appear to be an official inscription, rather a work of graffiti, as the carvings are shallow and untidy. 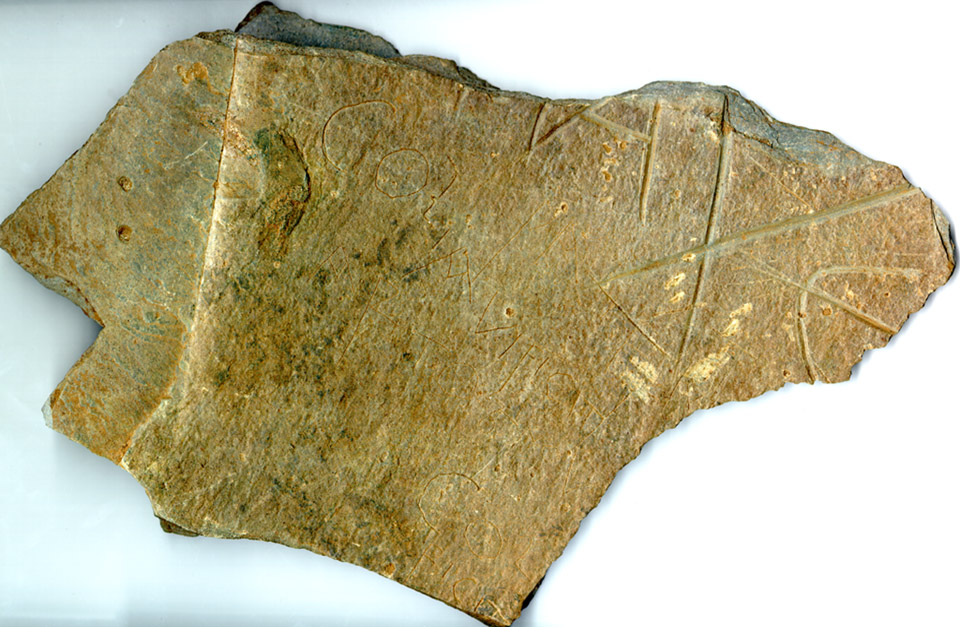 Another artifact, also refuted, is the Glastonbury cross. In 1184, at Glastonbury Abbey,  fire destroyed the monasteries. While reconstruction was underway, visits to the abbey declined, that is until the burial place of King Arthur and Queen Guinevere was reportedly discovered, alongside a leaden cross that read: Hic jacet sepultus inclitus rex Arthurus in insula Avalonia (“Here lies interred the famous King Arthur on the Isle of Avalon“). (Wikipedia). In retrospect, this incidence has been dismissed by scholars and historians as nothing more than a publicity stunt by the abbey to attract visitors (Britannia History). 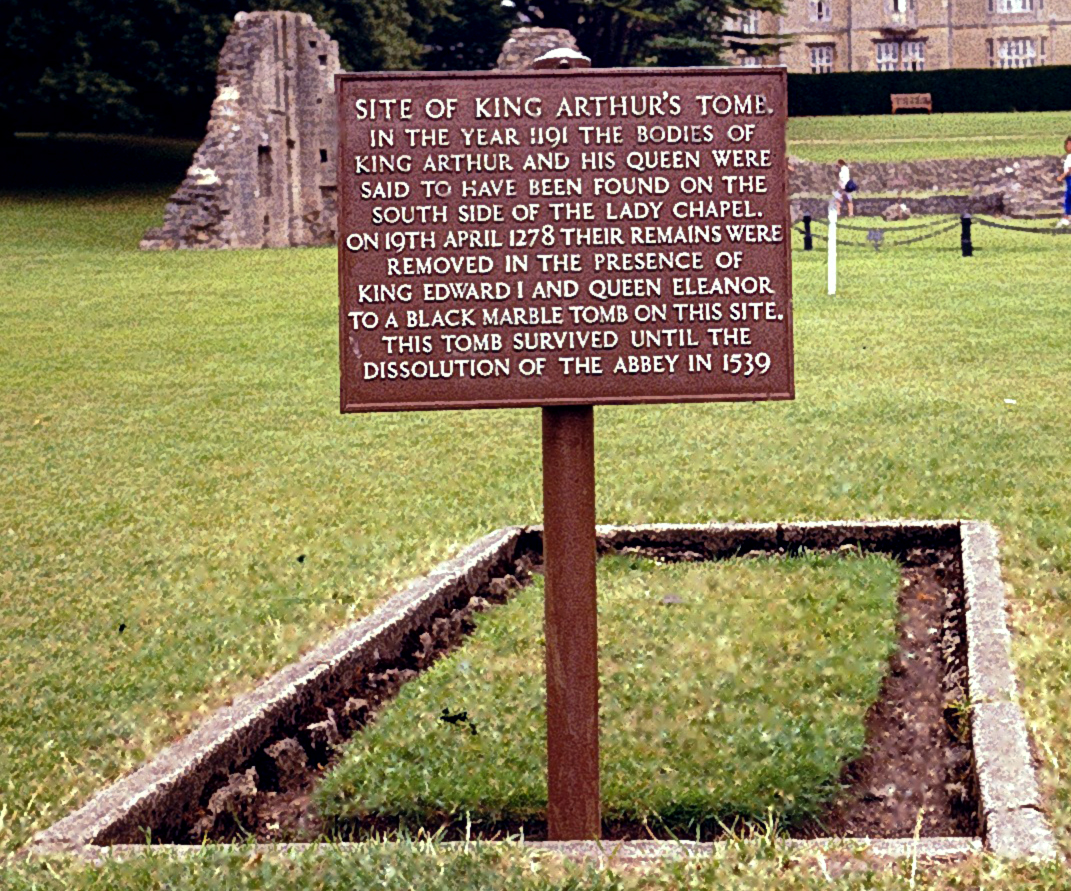 Most recently, a castle was discovered on the Tintagel peninsula in Cornwall. This structure evidently housed noblemen of the area, based on the additional findings of fancy, imported food utensils, such as plates from North Africa and glass cups from France (Daley). Most relevant to the legend of King Arthur, however, is the fact that this structure lines up with the writings of Geoffrey of Monmouth, who wrote History of the Kings of Britain in 1138. Geoffrey claims that King Arthur was either conceived or born in the same area that this high-profile structure has been discovered (Huber). In discoveries such as this, it is important for researchers to objectively analyze what they have found, rather than seek to connect their findings to King Arthur. Prematurely claiming Arthurian ties without backing evidence only encourages the spread of misinformation among both media and scholarly works. Such has been the case with the Tintagel excavation: the slightest inkling of possible ties to King Arthur are ran with, and facts becomes muddled (Proctor).

Based on these artifacts, evidence for the historical King Arthur is rather shaky. The castle-like structure carries the most weight, as Geoffrey of Monmouth described a similar location for the origin of Arthur. Altogether, however, physical evidence for King Arthur is about as convincing as the written and spoken testaments of his existence. The evidence, or lack thereof, points towards King Arthur existing only in legend.

Proctor, Elizabeth Gaj. “The Legendary King: How the Figure of King Arthur Shaped a National Identity and the Field of Archaeology in Britain.” DigitalCommons. Last modified May 2017. https://digitalcommons.library.umaine.edu/cgi/viewcontent.cgi?article=1267&context=honors. (accessed November 4, 2018)

Ambrosius Aurelianus was a 5th century Roman leader in Britain. From the writings of Gildas it can be determined that he was noble or descended from nobles, and most likely a Christian as Gildas said that he won his battles “with the help of God.” Had he not been a Christian, the author would likely have neglected to mention him at all, or at least not by name.

Based on a record of Saxon conflicts by Bede, it is generally accepted that his parents and many of his people were killed in an early invasion. According to Gildas, Ambrosius organized the survivors and defeated the Saxons, though this is disputed by other historical records which claim multiple battles were fought, with both sides claiming victories.

In Historia Brittonum, written by Nenius, Ambrosius morphed into a semi-mythical character who warns the hero Vortigern about dragons. Some believe Geoffery of Monmouth took some of this character’s superhuman attributes and changed his name to Merlin in his work History of the Kings of Britain. In Latin, Merlin’s name is given as Ambrosius Merlinus.

Based on Geoffery’s writings however, Ambrosius would have been too old to have fought in Arthur’s battles. He would have been around 70 years old when Arthur should have fought at Camalan. Based on this information, some people have concluded that Ambrosius is not Arthur, but his name and some of his deeds may have become mixed up in the Arthurian legends.

Ambrosius was known to the Welsh as Emrys Wledig (The Imperator). Some sources name him as the brother of Uther Pendragon, father of Arthur, while others write him as the great warrior king that Uther may have been based on. Since Ambrosius was likely too old to have been Arthur, it is more likely that his victories against the Saxons led to him being written into myths as the famous king’s father, who was also known for his prowess in battle

Some have speculated that there were two men named Ambrosius, possibly an older and younger brother, one who fought against Vortigern in battles often attributed to Uther, and another who fought against the Saxons in the 5th century. This is unlikely however, as historical sources have only ever alluded to one Ambrosius.

Was King Arthur based on Jesus? I personally do not believe this is true, but it’s important to consider. The Annales Cambriae mentions Arthur carrying a cross for 3 days and 3 nights in year 516. This could potentially be a retelling of Jesus carrying his cross and being resurrected on the third day. Mordred is a man who betrayed Arthur. In year 537 they mention Arthur and Mordred dying. Mordred could be based on Judas who betrayed Jesus before he was crucified. The knights of the round table could be Christ’s apostles.

There are many reasons why I don’t believe Arthur was based on Christ. Thus said Arthur, noblest of kings: ‘See ye, my Britons, here beside us, our full foes,–Christ destroy them!’ In this legend Arthur is mentioning Christ. It’s strange that legends would refer to him mentioning the person he’s based on. Most of the rest of Arthur’s stories don’t relate much to Jesus himself.

It’s more likely he’s based on other religious figures such as saint Armel. Saint Armel was a prince who established some churches, retired as a monk, and even had rumors of slaying a dragon. While not talking about Arthur himself, there’s a quote that says, “to have such apostles for leaders was to have Christ Himself fighting in the camp.” The people may have thought similarly of Arthur and it’s possible that while not being based directly off Jesus, Arthur was a religiously impactful leader.

Robert Vermaat “The text of the Vita sancti Germani.” http://www.vortigernstudies.org.uk/artsou/constex.htm

Arthur was Based on Many Leaders (iamcamalot)

Based on the widespread popularity of the Arthurian Legends across many cultures, it is my belief that the historicity of Arthur was created from many different historical, mythical, and religious figures.  Due to the larger than life nature of Arthur’s feats, it seems unlikely that they were all completed by one man, let alone in one very short medieval lifetime.  There are also evidences of the mixing of religious and mythological themes along with the historically accepted battles, guesstimated timelines and locations.  The story of Arthur is popular in not only the Celtic traditions, but is claimed by the Romans and Scottish as well.

Given that there is a long list of potential claimants for the historical role of King Arthur, it stands to reason that there is likely the influence of one or many of those individuals in the lore.  The most commonly accepted theory is Ambrosius, mentioned above, but due to discrepancies between the timeline and other details, it is not likely that he was the one and only Arthurian archetype.  Other potential candidates for Arthur include a wide timeline and potential locales.  (Ashe)

Another reason that Arthur’s story is not likely to be based on one historical figure is that there are echoes of cultural influences of mythology, folklore, and religion in each culture that has adopted the Arthurian legends.  Christianity is one example. (Crawford) Irish and Celtic folklore is another. (Loomis) Lastly, there is a heavy link to Sarmation culture in many of the artifacts associated with Arthur. (Littleton) (Wadge)

One thing is for certain, the idea of a brave and just king was popular.  Add to that, the heroic journeys, epic battles, and magical elements to his story, there is little to rival such a romantic telling of history.  Let’s face it, the middle ages were no picnic to have lived through.  If the story of the legendary King Arthur was made up of only facts, it likely would not have endured through the ages.  There is something about the ethereal mythical properties of the tale that linger in the imaginations of men and women throughout the ages.  It is no wonder that the legend itself has gained a form of immortality, much like Arthur does in some versions of the story.