Chariots were used in the west from about 1600 BCE to about 100 CE (Forte and Caley, 188). Though there is some evidence of usage before and after this time, these pre- and post- cursor models were not examples of true chariots because the rigging supports a seated driver and there are more than two wheels.

Chariots served two major functions in the ancient and early medieval periods: sport and warfare. The use of chariots in battle was somewhat limited by terrain. For example, the Greeks did have use of battle chariots as mentioned in Homer’s Iliad, however, the ground in Greece an 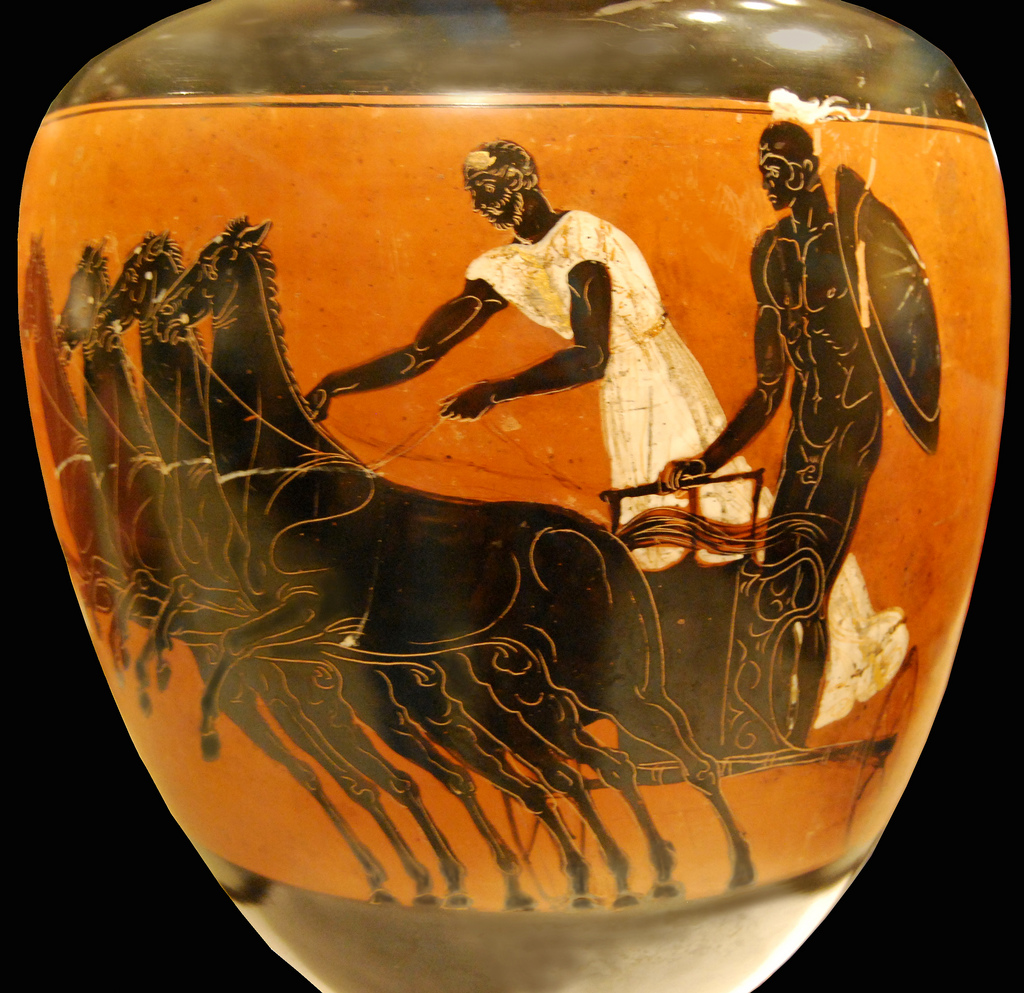 d most of the surrounding countries was too uneven for chariots to be useful in their full capacity. Because of this they were mostly used to ferry warriors in and out of battle and to deliver messages. “When they reached the ranks of the Trojans and Achaeans they left the chariot, and with measured pace advanced into the space between the hosts” (Homer, 60). Here two warriors ride into battle and abandon their chariot upon arrival for someone else to use, or steal. Homer’s descriptions of war chariots and their use in battle has been invaluable to historians that would’ve been otherwise baffled at the strategy employed by the Greeks when using chariots ( Stagakis). 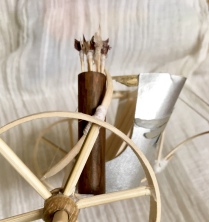 When used effectively in battle there are two passengers per chariot; one to drive and  one to fight. Combat was usually done with a bow and arrow, but a spear was also used, though less effective due to its limited range as a melee weapon and its even more limited use as a ranged weapon. Truly, the pinnacle of chariot warfare were the Egyptian chariots. They were the fastest and most maneuverable chariots in the west for centuries, capable of thundering quickly into battle to disrupt enemy lines with a barrage of arrows and sharply turning to race out of enemy range, they were a sight to behold (Harvey).

Despite the famous accounts of Greek usage in the Iliad, and the military might of Egyptian war chariots, arguably the most well known use of chariots was for sport. The Romans used chariots briefly for battle before retiring them to parades and, having been influenced by the Greek Olympics during the He Tomb of Roman Official and His Wife

llenistic age, races. These races were extraordinarily dangerous, a piece in the British Museum depicts a Etruscan chariot racing accident  “… great confusion: contorted horses overturned, legs flailing, a broken chariot with its wheels seeming to spin” (Banducci, 1). The Races served as a distraction for the public, becoming invested enough to riot.

General History and the Uncertainty of the Tapestry as a Source:

The Bayeux Tapestry is an 11th century embroidery depicting the Battle of Hasting, the 1066 battle between the invading French-Norman army, led by William the Conqueror and the Anglo-Saxon King Harold II. Both men had a claim to succession on the English throne, it was given to Harold, after he betrayed William the Normans invaded England to claim the throne. The tapestry is in very good condition despite being commissioned in the 1070’s CE (The Original Bayeux Tapestry). This piece of art is generally considered a good historical source. It was made, and finished, within 20 years of the event in question, increasing the validity of the depictions. Furthermore, it is widely accepted by historians that Bishop Odo, cousin to William, commissioned the piece. This validates the events shown in the tapestry due to his presence and participation in the battle itself. However, there is evidence of tampering on the tapestry. There are holes and fade patterns that indicate pieces have been unstitched and altered. The most infamous example is the arrow that killed Harold. The tapestry, as it is now, shows the King being shot in the head with an arrow, however,  accounts say that in the original stitching he was impaled with a lance. “He was constantly striking down the enemy at close quarters, so that no one could approach him with impunity, for straightway both horse and rider would be felled by a single blow. So, it was at long range, as I have said, that the enemy’s deadly arrow brought him to his death (Medieval Sourcebook: William of Malmesbury, d. 1143?: The Battle of Hastings, 1066)”. The tapestry shows evidence of unstitching around the arrow, leading many to believe that a lance was originally depicted killing Harold and was later changed to an arrow, thus complicating the validity of other scenes.

William I, King of England from 1066 when he beat Harold II at Hastings and was crowned at Westminster Abbey on Christmas Day. (Hulton Archive via Getty Images)

Panel 69 is near to the end of the battle of Hastings, just before Harold is killed. The panel contains part of an inscription that reads: Here the French fight and those who were with Harold fell (Rud, 86). There is a noticeable influence of both French and Saxon in the Latin, this suggests that both Normans and English worked on the embroidery (Bouet and Neveux). Along the bottom, archers, and along the top (left at right) are what is possibly a peacock, a griffin, two lions, and an eagle. It is likely that each represents something. Owen-Crocker, specifically noting the birds in the tapestry, says “Often they echo what is going on in the main frame… Although birds are often used in the Tapestry to illustrate and comment on human situations, sometimes, conversely, it is as birds per se that we see them (252-253)”. Here the tide of battle is in favor of the Normans and the animals depicted along the top border may accentuate that. Symbolically speaking, a peafowl represents immortality, while a Griffin is the King of all Animals, often symbolizing Christ and holy aide. Lions are for kings, in this panel they are facing opposite to each other, this could be symbolic of the opposition between Harold and William, as both had a claim to the throne. Last is the eagle, which is a divine guide or messenger (Boehm and Holcomb).

I chose the username Beholdaman because it is a reference to one of my favorite interactions between Greek philosophers. Plato defined humans as “featherless bipeds” to which his philosophical rival, Diogenes, brought a plucked chicken to the steps of Plato’s academy proclaiming “Behold, a man!” Learning about this helped me to see how history, especially ancient history, is romanticized. For me at least, the philosophers were peaceable old men quietly teaching and discussing great moral questions. All with a side of subtle social commentary. I now know that they disagreed and often fought. It has helped me to view historical figures as human.