Egyptian chariots were the focus of my research, the Ancient Egyptians used the chariot to great effect in battle. An important reason behind this success is that the lands the Egyptians were fighting for had terrain that was perfectly suited for the chariot to travel on: flat and even. They redesigned the existing chariots and developed unique features that lead to their great success with the vehicle. 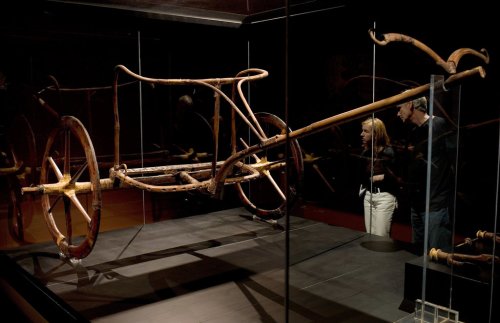 The Egyptians shaped the pieces of their chariots by using steam (Harvey). A piece of the proper size would been saturated with water until it was flexible, it would then be bent into the needed shape by several workers using a jig that would hold the wood in place until it dried. Pieces would be further shaped to fit properly with other pieces. The different pieces would be tied together using soaked strips of rawhide that would tighten when they dried. The body of the chariot was narrow back to front and wide enough to hold a driver and an archer. The front of the chariot would be covered in leather. The leather covering would have cutouts in it to reduce the overall weight of the chariot. 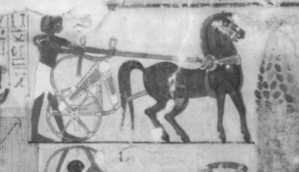 Horse in collection, indicated by the hind legs being bent

The harnesses were designed to put the horses in collection, which shifts the balance of the horse backwards, putting more weight on the hind legs. This position allows the horses to turn more quickly and easily when pulling the chariot (Hansen). This enhanced the maneuverability of the chariot, which was crucial in a battle.

Egyptian chariot wheels were built to be strong, flexible and light. This contrasted the existing style of Sumerian chariots which usually had heavy, solid and rigid wheels (Rovetta). We can see from Egyptian art that there was some experimentation in regards to the need of spokes on the wheel. There are depictions of wheels with only four spokes, this was likely an effort to lighten the weight of the chariot. They likely found that four spokes was not supportive enough for the wheels and so increased it to eight, which while supportive greatly increased the weight. The number of spokes was reduced to six, supportive but more lightweight than with eight spokes, this seems to have been the golden number as six spokes remained to be shown in artwork for the duration of the chariot’s use in Egypt (Harvey). 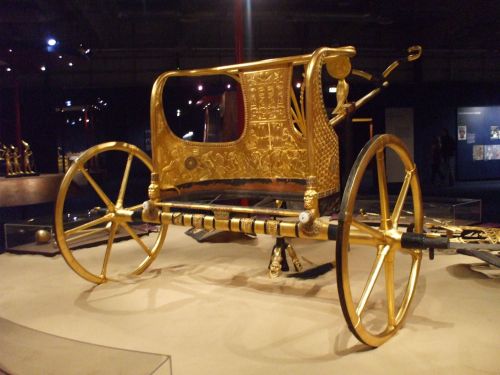 Axle positioned at the back of the platform

Another redesign the Egyptians made was to move the axle to the back of the main platform. Previous chariots had the axle positioned in the middle of the platform. This move made the base of the chariot move less and made for a more stable platform for the archer.

The the curved shaft also contributed toward the ‘suspension’ of the Egyptian chariot. The shaft was made of a single piece of wood bent into a flattened s-shaped curve. This piece was attached to the crossbar that connected the horses’ harnesses to the chariot. It was securely attached only at the back of the main platform and the front of the platform rested on this piece, which was also made of flexible wood. The flex of the wood took a lot of the impact from the uneven ground and the movement of the horses rather than it going straight to the platform (Harvey).

The Ancient Egyptian chariots, such as those found in the tomb of Tutankhamun, could certainly be considered high performance vehicles for the time period. They were light, sturdy and quick. The many developments made to these chariots is what allowed the Egyptians to use them to such great effect.