Even though we completed a project we have elected to split our blog post into three for ease of reading. This first section is about the process we used to build our model chariot.

Supplies for building the model chariot

We wanted to imitate the actual methods the Egyptians used to build their chariots as closely as we could.  We referenced several of the chariots discovered in the tomb of King Tut to build our replica. These chariots are some of the best examples we have of an Egyptian chariots, they would have been built around 1350 BC, and detailed drawings were made when the tomb was discovered that we used for further reference beyond the photos. The chariot we chose to build our model of would have been more of a parade chariot than a war chariot, the only major difference is the covering on the front of the chariot. A war chariot would have had a leather covering to reduce weight rather that the metal plated wood we replicated on our model. 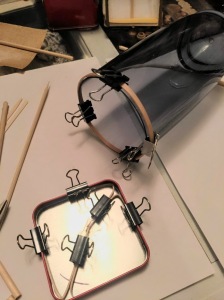 Difficulty with the wheels

They used steam to bend their wood, we actually submerged our wood in hot water because it was faster, but it produced the same result. We did not have the means to build several miniature jigs to hold our pieces at the proper angles, so we settled for using binder clips to clamp the pieces to whatever we could find that looked like the correct angle. This worked for most of the bend pieces, but the bend required for the wheel spokes proved too much for the low quality wood we had to work with, most of the pieces broke enough that they would not have been stable. Eventually we had to give up on making the spokes authentically and used single pieces to represent the six spokes.

The Egyptians bound their wood with strips of rawhide or leather, which we represented at some points with white string. We decided to use hot glue for our model because we did not have the patience to wrap and tie that much string, though we did imitate the appearance of rawhide on some joints of our model. The pharaoh’s chariot would have been finely carved and decorated with metal leaf, we are poor college students, so we opted for metallic sharpie on paper instead.