Horses used in battle had to be large and strong enough to carry the weight of a fully armored knight on their back. They also had to be relatively fast and agile enough to turn rapidly and accelerate quickly. Battles were also loud, chaotic, and difficult to follow, and these horses had to be desensitized enough to respond to their rider’s cues even in circumstances that would normally frighten them.

Before medieval times, cavalry was defined almost exclusively by small, light horses and riders with little armor. The medieval era saw the beginning of heavy cavalry use. However, such occurrences were rare as almost all offensive medieval battles took place in the form of sieges. Any cavalry used in these situations were light and fast. In fact, cavalry typically rode through for an initial charge, then left their horses at the rear of the army and continued fighting on foot. By the late Middle Ages however, large pitched cavalry battles became more and more common and heavy cavalry was introduced as an attempt to counter the increasing success of infantry attacks. This era saw the introduction of knights and horses in plate armor, armed with lances and spears rather than axes and swords.

The development of new riding technology was crucial to the success of knights and warhorses in battle. The invention of the solid-treed saddle by the Romans allowed a rider’s weight to be distributed evenly over a horse’s back, with the heaviest point resting on the shoulders rather than the spine. Not only did this prolong the useful life of work and riding horses, it made carrying a fully armored knight much more feasible. The seat was also more built up, providing the rider with greater security and further reducing the amount of weight placed directly on the more delicate part of the horse’s back. The cantle of the late medieval saddle was also built up enough to allow a rider to wield a lance more effectively. 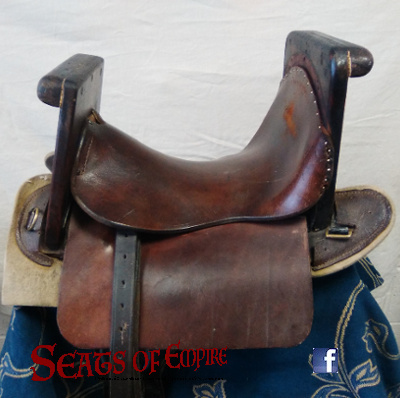 In addition, the solid-treed saddle allowed for the attachment of stirrups. Stirrups were invented in China around 480 AD. By the late 8th century, largely due to Central Asian invaders, they began to be adopted by European riders. Stirrups were beneficial to riders because they allowed them to distribute their weight through their feet rather than gripping with their legs to stay on the horse. Along with the raised cantle for support, a knight could now stand up in the stirrups and lean much further to the left or right in battle. Knights began using a wider variety of weapons as a result, including javelins and sometimes swords rather than the typical couched lance that could be used from a stationary position.

Hyland, Ann. The Medieval Warhorse from Byzantium to the Crusades. Royal Asiatic Society, 1994.