Leading up to the Middle Ages, a great deal of quality breeding horses had been lost due to a lack of need for well-bred riding horses and uncontrolled breeding. This was a significant factor in the way horses were bred during this time: based much more on size and ability than whether they shared bloodlines or defining features with the stock they were bred from. The Spanish were an exception: having already developed a reputation as a horse breeding land, they maintained several significant bloodlines and “Spanish horses” were renowned throughout Europe as the highest quality, and most expensive, horses.

Since the medieval war horse didn’t belong to any particular breed, nor do we have records of any of these horses’ bloodlines, it is unclear exactly what breeds it originated from. Popular theory usually suggests that the Spanish Jennet, a type of draft horse that was an ancestor to modern Andalusian and Friesian horses, was also the principle ancestor of the medieval warhorse. Another breed, known as the Nisaean breed (now extinct, but may be akin to the modern Turkmen horse or Akhal-Teke), is thought to have contributed to medieval breeding stock as many of these horses were brought back to Europe from the Crusades. Some sources from Germany also allude to quality horses from Scandinavia, though what breeds they are referring to is unknown. 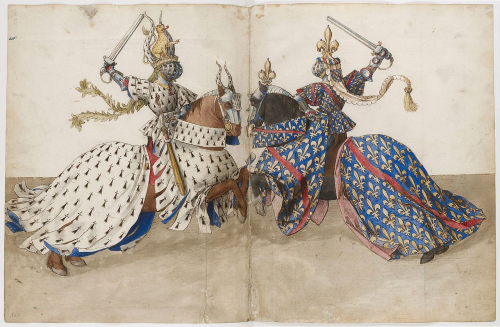 Depiction of destriers with light feathering on the legs, similar to modern draft breeds such as the Belgian and Percheron

Selective horse breeding became more common once the people realized how important good warhorses were to success in battle. The implementation of these practices was due in large part to the influence of Islamic culture both through the Crusades and the Moors’ invasion of Spain. Many of these cultures, especially the Arabs, kept detailed pedigrees of their horses through oral tradition. We have a very thorough knowledge of modern Barb and Arabian breeds as a result, and many breeders can trace their horses’ ancestry back almost a thousand years.

While most Europeans didn’t start keeping record of their horses’ pedigrees until the 13th century, the Spanish kept some of the earliest records of horse breeding on the continent. These were written mostly by Carthusian monks who, since they had the ability to read and write, were tasked with keeping records of breeding horses by the Spanish nobility. Hundreds of years of careful breeding resulted in what was known in Medieval times simply as the Spanish horse. Conversely, the English and French obtained much of their breeding stock by rounding up wild moor ponies. 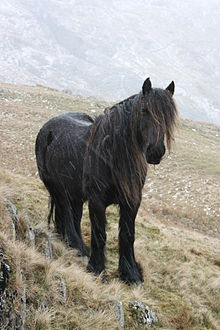 This is a Fell Pony, a small, stocky breed with feathered legs. The medieval destrier may have looked something like this.

The medieval warhorse is considered an extinct breed today. As the use of horses changed over time, so did the way people bred them and selected for traits. Horses have become gradually larger over time, small, stocky ponies were replaced by taller and lighter horses for riding, and huge, heavy draft breeds for farm work. The specific type of horse known as the destrier disappears from record around the 17th century, making it difficult to trace exactly what breeds evolved from it. Many modern draft breeds claim connection to the famed medieval warhorse, including the Percheron, Suffolk Punch, and Belgian. Some historians think this is likely, while others contend that the destrier would have been much smaller and somewhat lighter than the draft breeds, as well as being known for its “hot-blooded” nature. A suggested solution is that the destriers were crossed with more “cold-blooded” draft breeds as the use of horses shifted to farming, and the modern draft breeds evolved from there. The Friesian is often claimed to be a direct descendant of medieval French warhorses, though, again, the modern version of this breed must have evolved to some degree. Proponents of this theory often point to the previously mentioned practice in England and France of rounding up wild ponies to use for breeding. The Fell pony, a small, hardy breed found in the mountains between England and Scotland, is known to share ancestry with the Friesian. Many therefore argue that the breed has at least some relation to the medieval warhorse.

Hyland, Ann. The Medieval Warhorse from Byzantium to the Crusades. Royal Asiatic Society, 1994.