Who Is King Arthur? 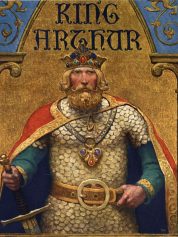 Legends typically form through either a kernel of truth or just a made up story. It is very possible that King Arthur may have been based on a true person, but as time passed and as oral traditions of the story became deformed, the true historical person was credited with feats and quests that he simply did not do, which would make the main character of the story an entirely different person. In this case, a made up one.

Legends start like this. We have an event that is worth retelling. As we retell it, we forget the things that didn’t mean much to us, but glorify the story where the character did something amazing. Running a story through such a filter like this over and over again via oral tradition is bound to get yourself a legend. One that seems to be unrealistic.

This explanation seems likely as this sort of pattern is found to be true among human nature; Remember the fun stuff, forget the boring stuff.

It is also very possible that the story is a political or religious anecdote. Some have made similarities between the story of King Arthur and the Bible, claiming that King Arthur was similar to Joshua. Another claim suggests that the legendary 12 battles that King Arthur fought in was not so much historical, but had more of a biblical and symbolic meaning pointing to the 12 tribes of Israel. As for the political standpoint, there have been sources that cite that English Rulers like Henry VIII and Queen Victoria used the story of King Arthur for political purposes, suggesting that the story was skewed for the purpose for whatever the ruler so pleased. For example, although he didn’t skew the story, Edward III of England tried to make his own Knights of the Round Table, called the Order of the Garter. On the flip side, the legend of King Arthur could have been used as a template for how English Rulers were supposed to behave (maybe leading the rulers to skew the story to lower the standards.)

While the accuracy of this information is up for debate, some suggest that the legend may have been a scare tactic and to portray the Britons as a more war efficient society than they really were. Not to mention the sense of pride that it brought to the Britons. King Arthur served as a mascot just as much as the Utes are to the University of Utah or the Lancers to Layton High School.
It’s interesting to note that all of the more known legends come after the fall of a civilization. For example, the Iliad after the fall of Troy, the Legend of Romulus and Remus, after the fall of Greece, and of course, the legend of King Arthur after the descent of Rome. It could be speculated that legends are made by merely a consolidation of a time where things were better.

Bonnet, James. “How the Great Myths and Legends Were Created.” Writers Store. https://www.writersstore.com/how-the-great-myths-and-legends-were-created/