An Archaeological Tour of Palmyra

The architectural styles of Palmyra are a testament to its history as a multicultural hub. Per UNESCO, “Architectural ornament including unique examples of funerary sculpture unites the forms of Greco-Roman art with indigenous elements and Persian influences in a strongly original style,” depicting “…the contact point between the cultures of Rome and Iran” (Linck and Fassbinder 21; “Site of Palmyra”). This is evident in “The local, stylized, frontal-figured ‘Parthian’ art [that] comprises statues depicting deities, notables … funerary busts … sarcophagi showing the deceased, wall paintings, including funerary Roman allegories (Achilles, Ganymede) plaster heads, and friezes” (Hornblower et al. 566). Subtle nuances in masonry observable when examining some column capitals even suggest a heavy influence from as far east as India (Seyrig 6). Until Roman occupation, Palmyrene artistic styles, in sculpture and architecture, were an extension of the Graeco-Parthian East, later adopting more Western forms, mimicking the styles of Hellenized Syria (Seyrig 6).

The Temple of Bel, dedicated in 32 CE, was the focal point of religious worship in Palmyra, dedicated to the Mesopotamian deity Bel, Aglibol, and Iarebol, gods of the moon and sun, respectively (Richmond 44; “Temple of Bel”).  As the British archaeologist Sir Ian Richmond explains, “…while the mode and, to a large extent, the decoration of the building is of Roman craftsmanship, its plan is based upon the requirements of a Semitic cult, no less individual in guise than Jehovah’s worship in the Jerusalem temple of Herod the Great” (44). Richmond describes this artistic meeting of East and West at the Temple of Bel as follows:

The group of gods worshipped at Palmyra … are represented in the military dress of Hellenistic type matched, for example, at Dura [Europas], and sometimes accompanied by the goddess Ishtar [(the Mesopotamian equivalent of Aphrodite)], who was the Tyche [(the Greek divinity of fortune and prosperity)] of the city. They are honoured by a great procession of male dignitaries wearing Parthian trousers and of women who are as heavily veiled as Eastern custom could at any time decree. A richly caparisoned camel bears sacred objects or offerings covered by a sumptuous canopy, reminding us of that which enshrines the sacred carpet on its procession from Damascus to Mecca. These vivid reliefs transport us into the Eastern world whose religious beliefs dictated the design of the great temple. The first quick glance might suggest a building of classical pattern. (44–45)

Seyrig adds to the discussion of divine icons at the Temple of Bel, citing another relief featuring “…two gods fighting against a monster, while other gods are pictured beside them, clad in Hellenistic armour, all standing stiff, all strictly frontal. Such repetition of similar figures had been attractive to the ancient Egyptian and Oriental artist” (3–4). The artistic element of frontality—figures represented as forward-facing and rigid intended not to dramatize a scene but to evoke the spiritual presence of the divine—is a distinct feature of Eastern art, a form not to return until the Orientally-influenced Byzantines (Seyrig 4), but these icons were showcased in a structure indistinguishable from the Graeco-Roman tradition. “Palmyra, therefore, a forerunner of Byzantine art as early as about the time of Christ, once more appears to us in that function as an outpost of the civilization of Parthian Babylonia” (Seyrig 4).  These motifs in relief sculpture were not the only elements exhibiting a hybridization of East and West—structural architecture spoke to this cultural confluence as well.

The temple was initially adorned with elements of metalwork; whether precious metals were used or if more common metals were merely gilded is unclear, but what is certain is that when the temple was repurposed as a church and later as a mosque, these elements were stripped from the façade (Richmond 46). At the height of its patronage, the temple would have been a spectacle. Its construction ensured that the “…high lateral windows, placed just in front of the sanctuary fronts, would … ensure that a subdued side-light would play upon the metallic surfaces,” illuminating the space to echo its divine purpose (Richmond 46). Commenting on two surviving relief sculptures within this space, Sir Richmond again describes scenes of Eastern belief enshrined in Western-influenced architecture:

The first bears on one side a wonderful processional relief with a horse and four male figures walking side by side, a canopy-bearing camel and attendant women…. The reverse of this bears a sacrificial scene, with a tall incense burner. Two more carry respectively processions of the gods and a sacrificial scene in which Bel receives a horse and attendant, with other male figures in the background. The architrave carved below the processional relief exhibits handsome scroll-work, more open in design than that on the soffit. This remarkable design as a whole emphasizes the fact that here the conventions of Graeco-Roman architecture are applied to liturgical requirements and structural forms which have nothing to do with Western practice or belief. (46)

To north lies a large colonnaded courtyard with a priests’ house on its north side, and to south a smaller court, also colonnaded, and associated with the banqueting chamber of a religious guild. The entire ensemble is thus to be connected rather with the cult of an individual group, no doubt connected with a great tribal sheik or caravan-family, than with the public cults of the city. The whole complex overlies an earlier cemetery on a different orientation, one of the sole traces of pre-Imperial Palmyra that has come to light. (47) 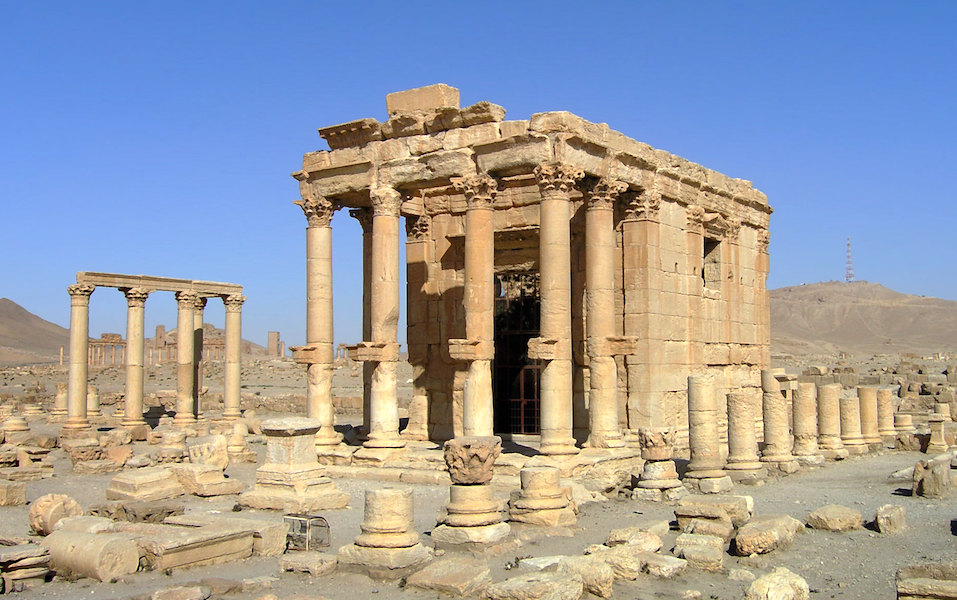 The Roman Theater at Palmyra

The Roman Theater at Palmyra is unarguable the most striking work of architecture in the city. Like the aforementioned temples, the theater is accessed via Palmyra’s intricate, ornate system of colonnades, a sequence of which leads to two large entry archways at either side of the stage. Undoubtedly constructed around the time of Hadrian’s patronage, “Its style suggests that the building is Hadrianic, as would agree with the unusually complicated planning of the stage … The surrounding colonnaded street is met on the axis of the theatre by a short colonnaded avenue leading southwards to a monumental entrance which later became the rear-court of a fortified city gate” (Richmond 48).

The Agora at Palmyra

Adjacent the theater exists the ruins of Palmyra’s Agora, a 71-84-meter structure, entailing the Tariff Court and the Triclinium, within which stand two hundred columnar bases that once served as foundations of sculptures of prominent citizens: “the eastern side was reserved for senators, the northern side for Palmyrene officials, the western side for soldiers, and the southern side for caravan chiefs” (“Palmyra”). This market place was “…surrounded by a simple portico, of which the colonnaded front boasts twenty columns a side. The earliest inscriptions on the columns are Flavian, of A.D. 76 and 81, a time when Imperial road-making towards the Euphrates was in progress” (Richmond 48). That this complex was a public space is supported by the space’s resemblance to the Agora at Delos: “The back wall of the colonnade is pierced by no less than eleven doors, thus creating the impression not of a closed Forum, but of an open market-portico” (Richmond 48). Inscriptions deciphered within this complex exhibit evidence of trade networks on a surprising scale, indicating “…direct relations of Palmyra with Scythia, the current name for the Saka kingdoms of North-western India, to which Palmyrene merchant vessels, sailing from harbours on the Persian Gulf, had access by the mouths of the Indus,” suggesting that “…Palmyra and north-west India in those days belonged to a single cultural circle or sphere of influence, the centre of which most probably was in the Graeco-Parthian towns of Lower Mesopotamia” (Seyrig 6).

Temple of Al-lat. Little of this temple has survived the centuries, save a few columns—and, fortunately, the Lion of Al-lat: a 3.5-meter-high, 15-ton relief that once protruded from the original temple walls (“Lion of Al-lat”). Its left paw bears the Palmyrene inscription roughly translated as “Al-lat will bless whoever will not shed blood in the sanctuary.” (“Lion of Al-lat”). When discovered in 1977, it had already been dismantled and repurposed for the temple’s foundation (“Lion of Al-lat”).

Valley of the Tombs. The Palmyrene necropolis is comprised of a complex of funeral monuments: more than 50, four-story towers just outside the city walls. Elsewhere, the Palmyrenes constructed hypogea, or underground tombs (“Palmyra”).

The Camp of Diocletian. Though largely ruined, this complex still exhibits a grand public bath, its entrance entailing four 12.5-meter-high, 20-ton, Egyptian granite columns, behind which is the bath itself, circumscribed by Corinthian columns (“Palmyra”).