Duke Philip of Burgundy and King Charles VII, after the Maid’s victories, had made a truce: the duke would relinquish Paris (which was the French capital even at that time) into Charles’ hands after fifteen days. This was a ploy to avenge the duke’s father John the Fearless, the former duke of Burgundy, who had been murdered while making peace agreements and taking the holy sacrament with Charles VI. Duke Philip and the duke of Bedford began fortifying the city and called for loyalty from its subjects.

Joan of Arc suspected this truce was too good to be true. She wrote a letter to the people of Reims warning them to be watchful of their city and to have faith in her plan. She would not enter Paris quickly and would only remain peaceful to preserve the honor of her king. If she could have her way, however, she would attack the English once more.

The duke of Bedford began to be anxious. He couldn’t determine (himself) if his ally, Philip of Burgundy, was loyal. The duke of Bedford did have to pay Philip for his service and alliance. John (the duke of Bedford) sent spies, including his wife, to observe Philip’s behavior and report back to Bedford. John was also shorthanded. The Maid had captured a few of his lieutenants, including the duke of Suffolk and commander John Talbot, and had driven away Sir John Fastolf (who had fought against the Armagnacs at Patay). When he became desperate, John of Bedford took matters into his own hands. He called upon Charles to face him in Paris and reminded his Burgundian ally of his father’s death.

The armies met north of Paris at Montepilloy. There were skirmishes, but neither side was successful in luring the other to battle. The next day, the English forces marched back to Paris without so much as a direct word to the Armagnacs. John went to Vernon (between Paris and Rouen) to keep an eye on both those threatened cities. Charles, however, began retaking cities near Paris, which further intimidated the English.

King Charles, now that he had his crown, sought to bring peace to the region thereafter. He was admitted to Duke Philip’s court in Arras to begin negotiations. Charles was willing to give Philip the lands he had been given by the English, exempt Philip from paying homage to the French crown, and pardon the duke. Philip, still angry about his father’s murder, could not convince himself to accept any permanent negotiations from his father’s killer (even if Charles VII had been too young to stop it). They made a temporary truce for all lands north of the Seine river except for the city of Paris. The French now had a chance to reclaim their capital. 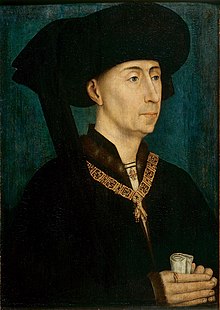 Philip the Good, wearing the collar of firesteels and of the Order of the Golden Fleece he instituted, copy of a Rogier van der Weyden of c. 1450

Unfortunately for Joan, the euphoria of her triumph was starting to wear off as the negotiations took place, and people all over the country, again, began to question her authority and power. She had little patience for the political skirmishes, but the Maid desperately needed her people’s confidence (and resources) to fulfill the rest of her mission. Her men, thankfully, still believed in her power and followed where she went. The Maid’s forces were able to retake Saint-Denis, a town dedicated to France’s patron, with little to no resistance, and this put them just four miles outside Paris.

Luck (and resources) had seen the Maid through to this point, but her aid seemed to abandon her with her attack on Paris. She would not be majorly successful in battle again.