After several months of not being allowed to fight, the Maid was able to rush north to repel the English as much as she could. The duke of Burgundy was expected to arrive with troops to crush her campaign, but he never appeared. Instead, he ventured to Compiegne to claim it. The citizens however, did not want to surrender themselves to him. They fortified the city with a moat and guns and stocked up on supplies so they’d be ready for whatever happened.

Joan of Arc felt confident in her ability to rescue Compiegne, just as she had Orleans. During the night of May 22, the Maid led her soldiers to the besieged city and attacked the Burgundians. Her enemies retreated farther and farther back from her barrage, the Armagnacs chasing them at their heels. Then suddenly, Joan looked over her shoulder to see that not all of her opponent’s forces were in front of her. She and her men could not fight a battle with two fronts. Her army began to retreat toward Compiegne, but the gate was closed before the Maid could get inside. Surrounded by Burgundian soldiers, Joan was forced to surrender. Her captor, Jean de Luxembourg, took her to his castle at Beaulieu-les-Fontaines to await the next move.

King Charles, other politicians, and theologians of his court had trouble deciding what to do regarding Joan. Now that she had been captured and not miraculously spared, it seemed that God had completely abandoned the Maid, so they determined to let her meet the end God had prepared for her. The English-controlled French believed Joan’s failure was in the failure of her mission. The theologians at the university of Paris wrote to the duke of Burgundy, asking him to release her to them to be tried (and condemned) for heresy. Jean de Luxembourg wanted a sizeable ransom for his prisoner, which he got from the English.

Instead of being tried at the university of Paris, King Henry VI’s counsellors moved her trial to Rouen, the English capital of Normandy under Bishop Pierre Cauchon. The understanding was that if she were found innocent by the church (which was highly unlikely), the Maid would be returned to the English. She represented herself bravely in court, but the church had decided her fate before the trial had even opened. Her first examination, as in Poitiers, was to determine if she were still a virgin, which she was. Then, again, her spiritual integrity had to be determined by interrogation. The Maid was told to place her hand on the scriptures and swear to tell the truth, which she refused. She would gladly tell of her journey and actions, but she would not speak about her revelations she claimed were from God. She eventually swore to tell the truth about the Catholic faith, so the trial could resume.

On the second day of her trial, Joan was asked about her home life and childhood, and eventually, to everyone’s amazement, she spoke about her revelations.Two days later, she was asked when she had last heard a voice to which she said she had heard one that morning and three times the previous day. The days spent in trial turned into weeks, and Joan knew her end was near. The Maid’s trial lasted over three months, but ultimately, she was accused of heresy for wearing men’s clothing (an abomination in the Old Testament) and spreading false doctrines among the people of France. She was sentenced to death and was burned at the stake May 30, 1431. 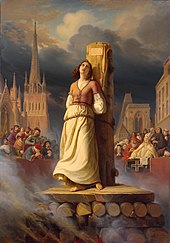 Joan of Arc’s Death at the Stake, by Hermann Stilke (1843)(Wikipedia Contributors)

In the end, Joan of Arc was unsuccessful because she no longer had the support she needed. King Charles VII lost faith in his extraordinary warrior and sent his troops home (after the failed attack on Paris). Others questioned her authority and holiness, which led to doubt being spread across France. Her capture at Compiegne seemed to prove her blasphemy (because God, if he had ever been on her side had forsaken her) and sealed her fate.