“Ugh, look at those ugly spires, those pointed ceilings. Not classical in the slightest.”

“I have to agree. It’s all because of the Goths. Those barbarians ruined everything good about architecture when they ended the Empire and its culture!”

“Exactly. This, fellows, is why we’re returning to the classical styles. We’re making things the way they used to be- good.”

Such, perhaps, was the dialogue between Giorgio Vasari and his fellow Italian renaissance writers, who falsely attributed medieval architecture to the Goths. Colored by their overwhelming admiration for classical Roman culture, they believed that the drastic change from Romanesque to medieval building came from the 5th century barbarian cultural takeover, and not from simple evolution of style. “Then arose new architects who after the manner of their barbarous nations erected buildings in that style which we call Gothic (dei Gotthi),” said Vasari in his book Lives of the Artists. Unfortunately, this misconception carried on for almost three hundred years from the renaissance era. “The term retained its derogatory overtones until the 19th century; at which time a positive critical revaluation of Gothic architecture took place” (Martindale). Today, we can look back at Gothic style cathedrals with admiration, for these marvels of art and engineering are certainly the pinnacle of their era.

The Reims Cathedral in France.

Before the Gothic style came into full usage, there was that of the Cistercian order. It may appear as if the simpler Cistercian designs evolved into the more grandiose Gothic style, however, the connection is not so simple. St. Bernard Clairvaux firmly believed in a stark contrast between architecture for the monks and for regular citizens. Rooted in the spirituality of the monastic lifestyle, “He readily conceded that [the secular cathedrals], ‘since they cannot excite the devotion of the carnal populace with spiritual ornaments, must employ material ones,’ in other words, that cathedral art had to make concessions to sensuous experience which the mystic no longer required” (von Simson). Rather than one deriving from the other, the Cistercian and Gothic styles ran parallel, connected to different ways of life.

The Fontenay Abbey, an example of Cistercian architecture.

But the Gothic style is, again, grandiose. Abbeys in the Cistercian style are expansive, but not elaborate. They emphasized function, for their inhabitants focused inward and upward in faith, not outward to everyday life. Gothic cathedrals impressed and inspired the general population with their ornate facades, vibrant colored windows and extravagant statuary. As Bernard claimed, the populous would draw closer to God in this atmosphere, full of tangible reminders and projections of glory. Fitting, considering the overwhelming focus on pointed arches as a theme of the Gothic style.

There was, of course, other significance in Gothic architecture aside from the spiritual, particularly in the construction of cathedrals. In the spirit of progress and innovation, masons would indirectly compete for the tallest, most expansive buildings. This competition, naturally, resulted in powerful engineering inventions- discussed in the next section- with incredible successes as well as spectacular failures. “Competition in height akin to that in twentieth-century American skyscraper construction led to a record spire at Strasbourg of 468 feet, equivalent to the height of a modern forty-six-story building, but also to the collapse of the nave at Beauvais in 1284, which put a damper on the competition” (Gies). 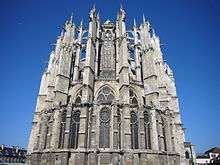 Gothic architecture is an incredibly significant aspect of art history. Those who built the cathedrals in the middle ages often knew that the work would not be complete in their lifetime. After all, some cathedrals took tens or hundreds of years to finish! Still, at the same time, these workers must have also known that the work was bigger than them, and would last far beyond them. That sentiment, an important trait of humanity, lasts to this day through these cathedrals, a silent reminder of hope.