A castle largely signifies power partly because they were built by people in power. After all, the primary castle builders were royalty and “those aspiring to greater power” (Bradbury 70). The castle structure was so intertwined with power that, in many ways, attacking a castle was the equivalent of attacking the area’s dominant power (Bradbury 79). As symbols of power and control and defensive structures, castles needed to be both impressive and resilient.

In England, the eleventh century onward did consist of conflicts like the finalization of the “Norman Conquest of England, the civil war of Stephen’s reign, [and the] wars between France and England” (Bradbury 71). An example of this is mentioned in The Anglo-Saxon Chronicle where, during the civil unrest of King Stephen’s reign of the mid-twelfth century, castle building resumed (Bradbury 70). One specific passage from The Anglo-Saxon Chronicle says that in A.D. 1137:

They filled the land full of castles. They cruelly oppressed the wretched men of the land with castle-works; and when the castles were made, they filled them with devils and evil men. Then took they those whom they supposed to have any goods, both by night and by day, labouring men and women, and threw them into prison for their gold and silver, and inflicted on them unutterable tortures; for never were any martyrs so tortured as they were. (The Anglo-Saxon Chronicle A.D. 1137)

During this time period, stone was the main building material, with particular emphasis on “well-cut ashlar” (Bradbury 70). Due to the new preference for stone, “architects, quarrymen, master-builders, masons, and stone-hewers” were esteemed for their constructive skills (Lepage 41-42). The value placed upon them is not entirely surprising considering that the strength of most medieval fortifications mainly relied “on its extreme solidity of construction” (Hindley para. 4). Castle construction was often immense with “workmen from miles around” being called in to help in the production, which could be quite expensive at times (“Lords and Ladies” para 4).

The rectangular keep was “a more compact form of stronghold” (Toy 66). The rectangular “great-tower was high, massive and vertical” (Lepage 46). These types of castles can still be seen today across Britain in various states of ruin. For example, the keep of Rochester Castle is much better preserved than the keep of Scarborough Castle. 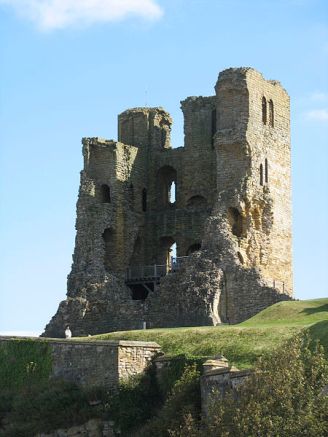 As a result of this dependence upon the advantages of the defensive construction, the comfort of the inhabitants often took a backseat (DeVries & Smith 230). This emphasis on defense can be seen in the construction of the castle’s prized feature: the walls (DeVries & Smith 230). The “walls could range from 15 to 30 feet in thickness” (Hindley para. 4) with the thickest region often being the base (DeVries & Smith 230). The walls were plain with buttresses at the corners and in the middle of each side (Yarwood 47). Stone constructions replaced the wooden outer defenses of the previous motte-and-bailey design (Gies 24). This outer wall consisted of “cut stone courses enclosing a rubble core,” was crenelated as well (Gies 24) and usually surrounded the bailey and castle (DeVries & Smith 230). The walls during the “eleventh and early twelfth century castles” sometimes only had battlements, but most “were strengthened at strategic points by square towers, projecting on the outside” (Toy 100). The straight lines of the design often resulted in an “oblong” shape (“Lords and Ladies” para 4). If the castle was on level ground, there was usually an additional defense outside the curtain wall: a moat (Toy 100).

The roof of the keep was usually flat (DeVries & Smith 230) though some sections had enough of a pitch that water drained off it (Yarwood 47). It often had a crenellated parapet as a defensive advantage (DeVries & Smith 230) though some keeps’ parapets have eroded away with time (Yarwood 48). This crenellation is one of the distinctive features usually associated with castles. The crenellation was comprised of two parts: the merlon and the crenel (Lepage 48). The crenels were the gaps that “allowed defender to shoot arrow and throw down missiles” whereas the merlon were the vertical stone structures that “offered shelter while reloading a bow or a crossbow” (Lepage 48). The crenellation usually extended to the outer wall defending the keep, and this crenellated wall was an added sign of “prestige” and “social sign” (Lepage 48), which is impressive considering that merely being able to own a castle was already considered prestigious (DeVries & Smith 227). An example can be seen in the diagram to the bottom right.

By this period, “the end of the eleventh and the beginning of the twelfth centuries, the function of castles began to change” with more castles doubling grand “as royal and noble residences” (DeVries & Smith 227-228). Their design meant that they were “convenient and secure” (Toy 66). This meant that the keeps usually had grand rooms like a “principal hall on the entrance floor,” and there was often a chapel—a must in the highly religious medieval ages (Toy 66). The keep also included rooms necessary for daily living: “the lord’s apartment, halls, chambers, staircases, kitchens, chapels, fireplaces, storerooms, latrines (which at times opened directly onto the outer keep walls), and sometimes even a dungeon,” which could double as a storeroom (DeVries & Smith 230).

In many ways, the very appearance of these massive keeps initially proved to be “a deterrent to attackers” (Lepage 54). “During the eleventh and twelfth centuries, the stone castle was seen in medieval society as a representation of power, strength, and defense” (DeVries & Smith 227). Not surprising consider that the building was tall, thick, and made of stone. The crenellation of the roof added to the keep’s intimidation factor because “enemies never knew if they were occupied by defenders armed with lethal bows and arrows” or not (Lepage 52). In addition to being the last line of defense, the keep acted also as the castle’s “main storehouse and residence,” (“Lords and Ladies” para 6). It provided both protection and a primitive form of grandeur.

Rutter, Clem. “Chroniclers Record that the Rebels Garrisoned the Castle With Between 95 and 140 Knights.” Wikimedia Commons, 29 Sept. 2011. upload.wikimedia.org/wikipedia/commons/1/1a/Rochester_Castle_Keep_0022.JPG. Accessed 04 Dec. 2016.

Toy, Sidney. “Chapter X: Fortifications and Buildings of the Bailey in the Eleventh and Twelfth Centuries.” Castles: Their Construction and History. 1939. Dover Publications, Inc., 1985. pp. 100-115