The time period is first and second century Imperial Rome, specifically 1-150 A.D.. The Roman Empire is continually expanding and gaining more territory, from scorching deserts to humid marshes. Rebellions and revolts are common occurrences, and a constant army is present (Matyszak 6). Soldiers of the Roman army are known for being ruthless, disciplined fighters. However, there is more to a Roman soldier besides life off to war. The family life of soldiers, specifically relationships with parents, “marriage,” and children will be examined.

The relationship between soldiers and their parents will be considered, because when a man enlisted in the Roman army, he left his parents behind. There is no question these soldiers missed their families much like modern-day soldiers do. Julius Apollinarius, a soldier in 107 AD, wrote to his father this message: “If you love me, do your very best to write and tell me about your health…as soon as the commander starts granting leave, I’ll come to you at once” (Michigan Papyrus 466). Also, tablets from Vindolanda, which date between 90-105 A.D., have similar messages directed to family members back home.

Although the men decided to leave for the army, they still made correspondence back home to stay close to their families.Homesickness and anxiousness were seen in messages like these. These messages show how Roman soldiers valued their relationships with those they left behind, and longed for their company while they were gone.

Nonetheless, Roman soldiers were intimate with and devoted to women (Phang 353-8). After life on the road and in battle, soldiers desired a taste of normalcy. This normalcy included a good washing, having tasty wine, and spending time with a woman. Whether these women were prostitutes, devoted “wives” who lived outside of camp, or both, they were a major part of a Roman soldier’s life (Matyszak 125-6).  The “wife” outside of camp was not a legal wife of the soldier she was devoted to. Nevertheless, she may have followed behind her “husband’s” legion and steadfastly waited until he left the army to marry her legally.

Soldiers were commanded to live a life of singleness while in the Roman army. Nonetheless, soldiers had relations with women. Some of these relations led to more committed relationships that morphed into pseudo-family units, with the “wife” and children following behind the soldier’s camp.

These women who depended on their pseudo-husbands in the army were risking their futures; these risks are presented in the next section.

The topic of children of Roman soldiers will be examined as children are usual accompaniments of romantic relationships between men and women. Soldiers may have left children back home with their divorced wives, or perhaps fathered children while in the army. In Roman society, the father, paterfamilia, was the head of the household and was given ultimate authority (“The Roman Empire”). However, the mother, materfamilia, was with the children more often, and the responsibility of raising good, Roman citizens was on her shoulders (“Women in ancient Rome”). 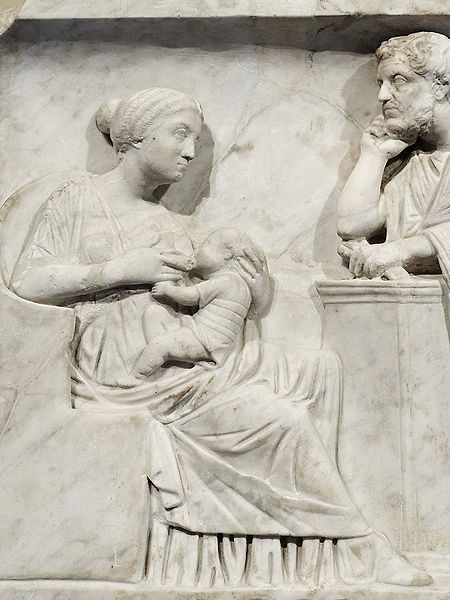 A carving of a Roman mother nursing a child while in the presence of the Roman father is displayed. Photographed by: Marie-Lan Nguyen (2009), CC BY 3.0, https://commons.wikimedia.org/w/index.php?curid=8911091

The women who had a divorce from their husbands received their dowry back in full, which may have either helped care for the children while the father was gone, or enable her to marry another. However, some soldiers fathered children while in the army, and most soldiers claimed fatherhood over the children they fathered outside of marriage. Unfortunately, the mothers and the children did not have legal financial protection if the father was a Roman soldier. If a soldier died without a will dictating where his property should be distributed, the woman and the children would not receive anything. Also, a soldier could legally decide to not take care of the woman and children, especially if she wronged him in some way, e.g. committing adultery (Phang 363-4).

Even though prohibited, soldiers fathered children while in the army. These children were not fully protected under inheritance law and paternity. Although most soldiers accepted and claimed their children, the illegitimate family unit was at his complete mercy.

The Roman soldier had a complex family life. Roman soldiers valued the relationship they had with their parents, still writing to them while away. Varying degrees of homesickness are observed in these messages addressed to those back home. Although the law prohibited Roman soldiers from marrying women, these marriage-like relationships were still formed. The woman who decided to engage with a Roman soldier and wait for him to marry her depended fully on his goodwill. As a result, the children were also in a state of limbo, with no solid future without a legal inheritance from their father.

The rest of the group blog posts will be posted individually. The other posts for this assignment are titled:

“For Leisure and When on Leave” – by [berossusofbabylon]