In the middle Ages, warfare often involved the surrounding and besieging of an enemy castle within their city walls. As I mentioned in previous blog posts, this type of siege-works was completely different from that experienced by the Roman’s in surrounding and starving an entire city, although they did share some commonalities. While Roman sieges were often very long and devastating, they usually did not involve the intense tactical and technological considerations required in breaching castle walls. This change, in part, may be attributed to the reduction of army sizes from Roman to Medieval times, which made sheer brute force against an enemy insufficient and no longer plausible. This is not to say that siege armies had few men, camps of cavalry and other infantry were always part of proper siege works (Morris, 1914), although they were not organized in the same manner that the Roman’s were.  This is to say that when dealing with a compact and concentrated defense structure such as a castle, the attacker was often faced with many tactical problems that required their utmost concentration like never before. In any case, in order to understand castle siege better, it is vital to first consider the basic design and purpose of medieval castles.

Although each castle was unique, they all shared one thing in common… they were nearly impossible to get inside of while under siege. A perfect example of such a structure is that of Château Gaillard, a famous medieval castle. This amazing fortification was build c.a. 1196 under the reign of Richard the Lionhearted of England, and was purposefully placed in a naturally defensible spot as to provide additional protection when confronted with a siege situation. These locational defense precautions taken by castle builders of the time period were appropriate especially as many castles were used as protection for a location of importance. For example, Château Gaillard overlooked the Seine River which was an important transport route at the time (Rigord, 1204). In accordance with these considerations, castle’s designs emphasized heavy fortification and defense as evident by the large walls and towers. Château Gaillard consisted of an outer and inner bailey (or outer and inner wall), along with several defense towers and ditches as mediums of defense (Hamill, 2012). In addition to all of that, Château Gaillard was also built on limestone as to further its sturdiness and protect it against potential undermining. The advanced design of this castle (and many other castles like it) clearly demonstrate that these structures were prepared for the worst, and that is exactly what they faced. 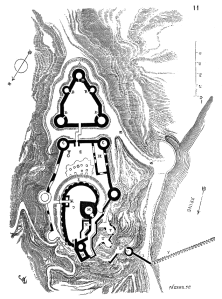 In c.a. 1204, the famous besieging of the castle Château Gaillard took place between the kingdoms of France and England, closely following the death of King Richard. King Philip of France was in pursuit of control of Normandy, and Château Gaillard was a central part in his campaign in so doing. In preparation for this six month siege, Philip besieged and overtook several, lesser, castles around the area. When the time became appropriate, the French army finally began to move into position to besiege the English castle. Rigord, a medieval monk, documented the siege’s beginnings saying, “When he had recovered his strength and that of his army he laid siege to Castle Gaillard, in the month of September following. This was a strong fortress which King Richard had had constructed upon a high rock which dominated the Seine near the island of Andelys” (Rigord, 1204). Phillip quickly identified his options and began to contemplate what his next move would be. He concluded that he could either find a way to sneak through his enemy’s defenses by means of breaching, or to open the main gate. The latter of the two seemed less desirable if not impossible, so he and his men immediately began to plot a method of breaching. Soon, the French were executing common medieval siege tactics including the scaling of castle walls and undermining. With the use of siege towers and other Siege Engines, the French were soon pounding through the outer Bailey. These actions did not come without any adversity from the English. By the time the first bailey was decimated, the French had experienced great losses. Although the defender always has a clear advantage in these situations, all good siege artist know that quitting never is an option.

As the French made it through the first Bailey, they quickly re-established themselves and began to work on the second, inner bailey. As I mentioned above, castles were designed to keep the enemy out, which kept the besieged in. This may seem irreverent, but all castle logistics carry some weight of importance to the invasion as a whole. This inability to allow people to leave castle quarters quickly became a major issue in this particular siege, as several local civilians ran to the fortified castle to survive from their burning villages (W. Contributors, 2014). How was this an issue? Well, before long these additional civilians began to greatly increase the consumption rate of the already limited supplies, making the situation within the castle walls even worse. While the defenders within castle tried to do everything possible to make any type of enemy breach impossible, persistence has a way of overcoming if it given enough time. Thus Phillip, now having lost many of his men, came up with a new idea that really encompasses the devotion nested in medieval castle siege tactics. He proposed that they climb up the garderobe, commonly known as a toilet chute. This may sound strange, and perhaps it is, but when an army is trying to breach enemy defenses nothing is too crazy or daring to do if it works… at least that is how they felt. This exploitation of the enemy’s architectural weakness ended up being significant enough that it cost the English the siege and King John was forced give into an inevitable surrender, as was the case for most defending parties of the time period.