The advancements made in siege warfare during medieval times set the stage for the basics of modern technology and tactics to emerge. The advanced engineering of the time period introduced basic concepts that still are used today. It was not always this fantastic, however. Initially the engines and tactics used were somewhat similar to that of the Roman Empire, however with the shift of siege warfare being inside of city walls about a castle instead of outside city walls about an entire city, things were rapidly changing. Throwing machinery and other artillery quickly became more effective, leaving the Roman technologies behind (Tarver, 1995), and eventually becoming the center of medieval siege-works. The use of these new engines caused major strategic alterations from both the offensive and defensive perspectives. So what were these machines, and what did they do?

Some of the most prominent engines of the time period were the siege tower, trebuchet, cannon, and scaling ladder. The scaling ladder, although in existence long before the medieval times (actually one of the first siege devices recorded), had specific significance in the context of this time period. That is, it allowed infantry to rush and scale Castle walls quickly and effectively, causing all kinds of problems for the besieged. It should be noted that this technique was often dangerous due to the concentration of defense atop of castle walls, and thus was not used until the time was appropriate. That being said, siege ladders did yield some success, especially with its legs being wedged firmly into the ground with a height fit to be very tall compared to the wall being scaled. These precautions were done to make the ladders very difficult to get rid of once established (Nossov, 2005). Other siege ladders or siege towers were set up on wheels and platform making the transportation easier and more effective. It was imperative that infantry in an invasion involving a ladder were well trained and prepared to take on lots of incoming fire. This tactic was dangerous because the besieged often were prepared with boiling oils, sand, or water to ensure a difficult climb.

The icon of medieval siege warfare is the throwing machines, particularly the Trebuchet. Although throwing engines had existed in the Roman times, it was not until this time period that they were widely used, and altered into a very versatile form. Before the final model of the Trebuchet was reached, Engineers experimented with various forms of force to set a projectile in motion. The Roman’s method utilized twisted rope, twine, or other forms of tension to allow projectile launch, and was referred to as the use of torsion (W. Contributors, 2014). The Early Medieval engineers turned from torsion, and experimented with different forms of force. One record suggested the use of wound rope and soldier manpower as a means of force. This, often unnoticed, engineering feat is referred to as the Traction Trebuchet, and clearly demonstrates the complexity of weapon engineering and the research that the engineers put into their war efforts (Tarver, 1995). 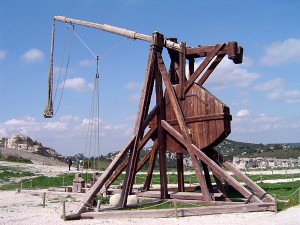 All this research eventually, and inevitably, led to the creation of one of the greatest modern weapons, The Trebuchet. The Trebuchet functioned on a counterweight system meaning that the object was set into motion through a large weight opposing the projectile driven by gravity. This system offered far better rapid fire capabilities in contrast to its previous counterparts. The Chronicle of James the Conqueror includes a brief dialogue with a siege engine builder, Nicoloso (the builder) says, “… in eight days I will build for you a castle of wood, and I will make it move on wheels up to the place, as you know I made the `trebuchets’ move up at Mallorca.” (Agrait, 2013) These builders were clearly skilled and very effective craftsman. The other major advantage that the Trebuchet offered was that it could be managed and run by far fewer people than its main predecessor, The Perriere. It also had improved accuracy and power making it an obvious choice in most siege situations, being able to launch a 100 kilogram ball a distance of approximately 200 meters (Nossov, 2005). Balls were not the only projectile fired however, Trebuchets were known to launch plague infected bodies, pots full of snakes, and other devastating objects. By the late 12th Century, the Trebuchet was well spread throughout the continent. Modern weaponry had finally arrived.

The next milestone in weapon engineering shows up around the 15th Century. That is, the development of gunpowder weaponry and specifically the cannon. Although this new technology’s capabilities were nowhere near as devastating as some of the other siege machinery of the time, the cannon immediately caught everyone’s attention, causing a great psychological stir. As an act of intimidation, large cannons were created as cannon size was considered to be of importance in its effect on the enemy, which clearly is not necessarily true (Nossov, 2005). The cannon was revolutionary, and not completely understood by its users, thus we see the cannon technicians often sheltering behind wooden shields when reloading to avoid injury! Other major problems were introduced as gunsmiths all made cannons in their own unique manner, meaning only specific cannonballs would fit your cannon. That being said, cannon bombardments became more and more effective with time as the technology advanced and became more palpable. Although the artillerymen running such weaponry were often noted to be cowards.

The advancements made in the middle ages clearly indicate accelerated strides in technology and their important role in the progression of warfare. The weapons that ended this chapter in history would be the ones that would be refined into some of the weapons that we are familiar with today. Warfare quickly was becoming a matter of technology and intellectual advancement, which attacked the previous ideas of success lying in bravery and charm. Modern warfare was emerging.