Blog 1 Death From Above: The Persian Bow

During the time of the Achaemenid Dynasty, Persians were able to conquer most of the known world.  Persian leaders, such as Cyrus, fought to conquer and control land and people from Ionia in Asia Minor, South to Egypt, and as far east as present day Afghanistan.  Instrumental in the Persian’s conquest were their weapons and battle tactics.  One of these lethal weapons was the Persian Bow.  With a range of around 500 feet—almost two football fields—the armies of the empire of Persia were able to rain down death from above.  Although they often took 18 months to manufacture, the Persian bow and the two major innovations it contained, was well worth the wait (“Iranian…”).

One of the contributors to the lethality of the Persian Bow was the fact that it was made of composite materials.  The bow had a wooden core.  Strips of horn were glued to the belly, while sinew was attached to the back.  Both of these measures were meant to reinforce the weapon. This technique was so effective, that it allowed the bows to have the same amount of power as much larger weapons of the same nature.  It packed a great amount of power in only a 48-inch frame (Dwyer and Khorasani 3-4).

Perhaps the best advantage to the Persian Bow was in its recurved design.  Traditional long bows of other periods were only a long, bent piece of wood.  The major drawback to this was the fact that the resistance was the same all the way through the draw.  Persian craftsmen bent the ends of their bows back towards the grip (as seen in the picture below). This, like its composite make-up, allowed the bow to pack more power than a traditional long bow.  More importantly, this innovation made it so that there was less resistance on the string the father back it was pulled. Tired archers were given a great psychological advantage and were allowed to stay deadly despite fatigue, because of this decrease in draw pressure (Dwyer and Khorasani 5). 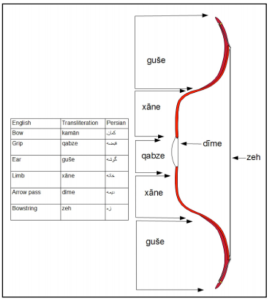 (Dwyer and Khorasani. “Figure 1.”  The signature curve of the Ear (Guse) of the bow is what made it so easy to draw)

Though the composite nature and the special curves of the bow gave it deadly capabilities, it would have been nothing without the arrows to go with it.  Perhaps the most important part of the weapon set, the shafts of the arrows were often made out of wood or reeds, the simplest of materials.  Reed material was preferred because it had great strength for how light it was (Dwyer and Khorasani 5).  The arrows were tipped with bronze or iron heads to pierce the armor of the Persian opponent (Shahbazi).  Together, the Persian Bow and its complementary arrows were a match made in military heaven. They truly were a destructive force that enemies both feared and respected throughout the Persian conquest.