The Sea! The Sea!

As the Greeks approached the Carduchian mountains, they were cautiously optimistic mixed with a little pride.  They had managed to survive and escape from the threat of Tissaphernes’ clutches.  The Persian satrap had given up perusing them because he thought that few of them would emerge for the treacherous mountains, but they would make through them. Since the Greeks had never subdued the Carduchians there was the threat of an encounter with the mountain tribes.  The mountains were covered with snow and when the tribes saw the army they took to the hills with their families.  This left no hope for neutral reception (Waterfield, 2006).

According to Xenophon the Carduchian tribes left the houses with plenty of food and bronze utensils.  The Greeks did not pursue the Carduchian people or take any of the bronze utensils.  They did however out of necessity take any provisions that they found. The Carduchians did not respond when the Greeks cried out to them.  At dawn the Greek generals met and decided to carry on with only the essential and strongest yoke animals, they would abandon the rest along with the recently captured slaves.  Their thinking was that many of the men were not able to fight because they had to care for the slaves and the animals and also they would need double the provisions for all of those people. The mountains would be hard to pass through and there could be attacks from their enemies.  Sure enough a there was a wintery storm followed by and attack were just a couple of men lost their lives (Xenophon, 2009).  The Greeks battled their way through Armenia and its wintery mountains.

Toward the end of their march, the men were actually staggering.  Days had stretched into weeks and the journey had taken its toll on everyone.  At Gymnias the local ruler had promised them a guide who would take them in five days to a place where the sea would be visible.  The men were full of optimism and hope that the long ordeal would finally come to a close (Waterfield, 2006).

Somehow the men managed to fight and pillage their way through the next four days.  On the fifth day they reached the mountain they called Theches. When the men arrived a huge cry went up.  Xenophon and the rearguard thought that they were being attacked.  The cry kept getting louder and nearer until it was apparent to Xenophon that something of significance was happening.  He mounted a horse and took Lycius and the calvary to lend assistance.  As they approached the front they could make out what the men were shouting.  They were shouting “The Sea! The Sea!”, everyone fell into each-other’s arms as they and even the company commanders and generals had tears in their eyes (Xenophon, 2009).

This marching republic had at last managed to reach the shores of the Black Sea at Trabzon.  This meant that they were at last among Greek cities.  It was not the last of their journey, which included a period of fighting for Seuthes II of Thrace, and ended with their recruitment into the army Thibron a Spartan general. (Anabasis (Xenophon), 2012).

Below is a map of the route that The Ten Thousand took during their march (Persian Empire, 2009). 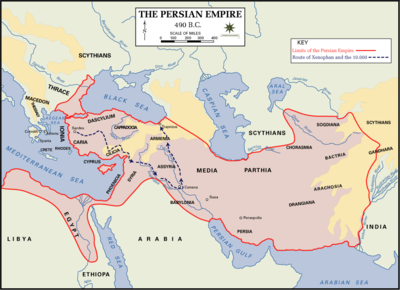