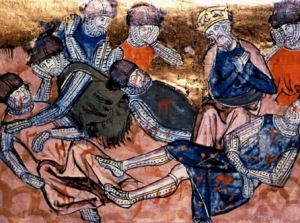 After the actual Battle of Roncesvalles, very little happened, or rather, we know about very little that happened. The battle was “not even mentioned in the Royal Annals, and for shame the whole Spanish campaign was omitted, but everyone knew what had happened” (Heer 108). We do know, however, that Charlemagne was “prevented by events in Saxony from seeking revenge” and distracted at home with a famine “partly caused by the absence of so many on campaign during the harvest” (Heer 114). Charlemagne spent the next 25 years in Saxony before the campaign was finished (Lewis 262). Since “Charlemange was engaged in almost constant battle throughout his reign” nothing more ever seems to have come of the situation (Wikipedia contributors). The Song of Roland has, however, stayed popular despite the historical obscurity of its origins.