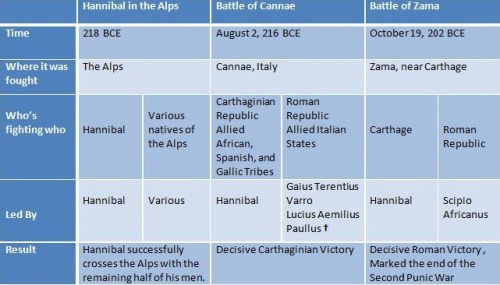 Hannibal employed many soldiers from many different places. His army consisted of soldiers from Africa, Spain, Italy and he even had Celtic soldiers. Each group of soldiers brought their own culturally used armour and weapons to battle with the Romans.

The African soldiers wore very colorful uniforms that came in different varieties. The heavy infantry wore chain mail over their clothes and carried heavy shields. They mostly fought with an assortment of exotic weapons which they were well trained with and proved to be useful and deadly when they wielded them. They also used spears and long and short swords.

The Iberian or Spanish soldiers carried wooded shields and used sling and javelins as well as swords and spears. The heavy infantry also wore chain mail and used the typical heavy roman sword.  They also used the falcata which is a sickle shaped sword made of iron or steel. The falcata is made from 3 lamina or sheet of steel.

The Celts or Gauls were armed simple iron long swords. The swords weren’t of very good quality and were used more effectively when hacking rather than stabbing (Polybius).  Both Plutarch and Polybius describe the Celts as often ceasing fighting so as to straighten their swords. Polybius and Livy also assert that the Celts didn’t wear any armour and often fought naked.