The Battle of Zama: Aftermath 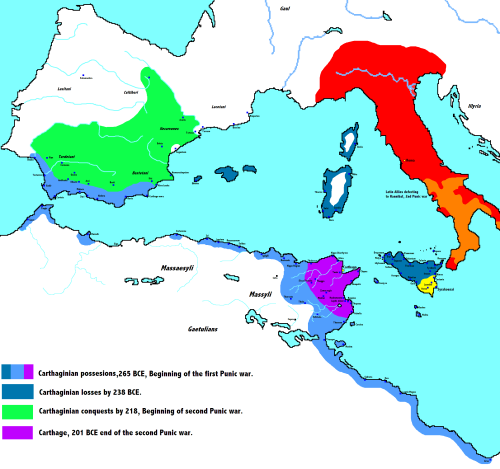 Carthage was reduced to a fraction of its empire at the end of the Second Punic War. (Picture in public domain.)

The Battle of Zama took place at Zama, near Carthage, in October of 202 BC. Publius Cornelius Scipio led the Roman army and extra Numidian cavalry against Hannibal and his Carthaginian troops. The Romans soundly defeated the Carthaginians, which brought an end to the Second Punic War (Wikipedia contributors).

According to Polybius, Scipio set the terms for a treaty and told the Carthaginian ambassadors. The ambassadors returned to Carthage to tell their senate, and Hannibal persuaded them to accept the “lenient terms” (Polybius). The terms of the treaty included parts beneficial to both sides, though naturally favoring the Romans. Carthage was to be a client state of Rome, but would be able to retain all territory owned prior to the war, as well as all property. Carthage would still rule itself, and no Roman garrison would be set in the city. In return, Carthage needed to return all prisoners of war and deserters to Rome, pay a tribute of 10,000 talents (200 a year for 50 years), and provide corn and pay the Roman army while they waited until Rome replied to the treaty. Also, Carthage had to give up 100 hostages (males between the age of 14 and 30), and give up their war elephants and all warships except 10 triremes. If crippling any potential land or sea force wasn’t enough, Rome forbade Carthage from making war on any nation outside of Africa, and required permission to war within Africa. F.E. Adcock suggested the Romans crippled the Carthaginian navy because they had a policy of making their states keep weak ones, so Rome wouldn’t have to build up a strong navy (118).

Masinissa, of the Numidians that had helped the Romans, was crowned as the King of greater Numidia. Scipio was given the name “Africanus”, and was proclaimed a war hero (“Results of the Second Punic War”).