Greek Strategy in the Battle of Marathon

Looking at the Battle of Marathon from the Greek side, we see that strategically the Greek (particularly Athenian) motivation was to defend themselves against Persian invaders. It is believed that King Darius of Persia ordered his general, Mardonius, to pillage, burn and enslave Athens as punishment for their role in the feeding the Ionian Revolt which lasted from c. 499 to 493 BCE (“Greco-Persian Wars”). In the battle of Marathon, 10,000 Athenian citizen-soldiers confronted an overwhelmingly larger Persian force and miraculously emerged victorious.

Even though fighting on home turf, the Greek force was still at a disadvantage.  Terrain is a definite deciding factor in any battle as each group developed fighting tactics based on the nature of the country—therefore, if one group can entice their opponent into an engagement on favorable terrain, there is a decisive advantage given to one party while the other is fatally handicapped. While the Greeks may have had home court advantage, the flat battlefield and surrounding country was ideal for the Persian cavalry (“The Battle of Marathon, 490 BC). Greek victory may be partially attributed to the ineffectiveness or tardiness of the Persian cavalry.

To Fight, or Not to Fight:

Herodotus recounts Athenian generals being divided in opinion whether to risk battle with the Persians because the Athenian forces were too few in number. The ten generals cast a vote, with the deciding eleventh vote belonging to Callimachus of Aphindae. It is believed that Miltiades, a general in favor of battle, approached Callimachus in an attempt to persuade his vote toward engaging in battle. His argument for conflict was that the people of Athens were faced with one of two options: submit to slavery without engaging in conflict or fight to defend themselves with the hopes that with a just cause and the assistance of the gods they can overcome the enemy and leave a legacy for future generations (Koeller).

When the vote was cast, the Athenian force prepared for battle. The small army succeeded in blocking the two exits to the plain of Marathon which brought about a stalemate. After waiting five days, the Athenians attacked the Persians (“The Battle of Marathon, 490 BC”). To the astonishment of the Persian army, what appeared to be a small handful of men charged across the plain of Marathon without archers or cavalry—apparently welcoming their own destruction (Koeller). Even outnumbered as they were, the Greek hoplites were much more effective against the Persian infantry (“The Battle of Marathon, 490 BC”).  In defense of their lives, freedom and city, the Athenian army slew about six thousand four hundred barbarians, while only losing one hundred ninety two of their own (Koeller). The victory at Marathon was monumental to Greeks, so much so that after the death of Aeschylus (a famous Greek playwright who is considered the father of tragedy) his participation in the Battle of Marathon was held in higher esteem than his life as a successful playwright (West).

Copy & Translation of the inscription on Aeschylus’s tomb (“Aeschylus”) 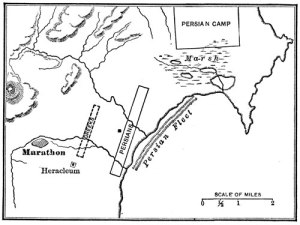 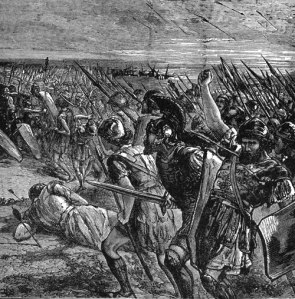 Fighting on the plain of Marathon (Hatzigeorgiou)